Addicted To iPhone? How About Some iPhone App Fridge Magnets

How addicted are you to your iPhone? Addicted enough to express it on your fridge with some iPhone app magnets? If so, check out the iPhone App magnets from Jailbreak Toys.

The magnets include the entire first iPhone home screen, including the newer “Messages” app instead of “SMS”. The only two missing apps are Voice Memos and Contacts.

The set costs $12.99USD with free shipping with the purchase of three or more sets. The magnets are rather cool looking and would make a great gift for that iPhone fanatic in your life, but there is only one problem…no
Canadian shipping!

At this time, it seems they only ship to US states, even though “Postal Code” is listed as a required input field. There are ways around this limitation, but it’s too bad that there is not a direct Canadian shipping method.

We’re currently in the process of getting our international shipping up and running. It will be ready to go on March 17. 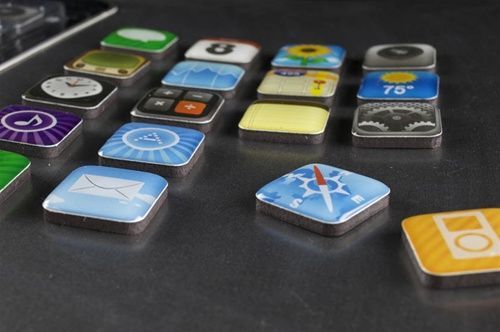