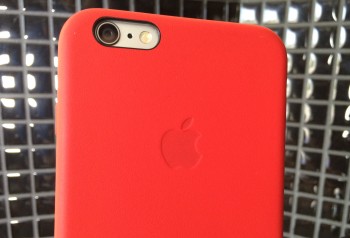 Along with the new iPhone 6 and the iPhone 6 Plus, Apple unveiled new cases for both phones. They come in either leather or silicon and they also come in a variety of colours. And again, like last year, you will be paying a premium for the official Apple cases. I’ve been using my Product Red leather case with the iPhone 6 Plus since launch and have been very impressed.

Here’s my video review of the case. I will point out, the iPhone 6 cases are exactly the same, except smaller, so my review will hold true for both the iPhone 6 Plus and the iPhone 6.

The leather cases are really nice. They feel great in the hand and add a little bit of grip, which is welcome if you have the iPhone 6 Plus. With the cutout bottom this year you should have no issues using any of your headphones or third part Lightning cables.

Many of you have also been asking how the case works with the InvisibleShield Glass screen shield from ZAGG. It works flawlessly. The screen shield is cut to only cover the touch screen, so there is plenty of room along the sides for the case.

Did you pick up one of the new Apple cases for your iPhone 6 or 6 Plus? Let me know what you think of them so far.