Boombotix, a company known for its loud portable speakers designed for iPhones, iPods, MP3 players & all other portable audio devices, has released a new line of ultraportable wireless and wired speakers called the Artist Series, in collaboration with a group of urban artists and designers from around the globe. 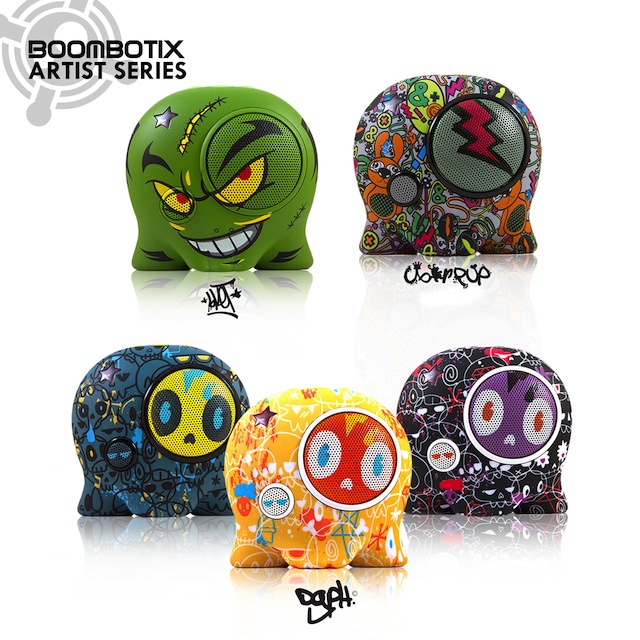 The Artist Series Boombots come in Bluetooth enabled versions (UberPup and Sket One designs) and wired models.  Housed in ruggedized ABS shells and featuring an integrated clip, Boombots allow your music to be taken with you, anytime, anywhere. Boombots include medical-grade rechargeable batteries, dynamic frequency response, and a no-matter-what one-year warranty.

This winter BoomBotix is excited to be launching a new incarnation of Boombots: the Artist Series. UberPup (London) incorporated graphic mayhem to her piece to exemplify her propensity towards mass chaos. DGPH (Argentina) rolled out an entire set of post-modern abstract work in three amazing palettes. Sket One (Los Angeles) delivered a pad print design called Mr. Grimey that completely put a new face on wireless audio. For a product that originated from urban vinyl toy design, the Artist Series salutes the design roots of the product.

The Bluetooth models retail for $79.99 and wired models for $54.99. The Artist Series is available through boombotix.com and select retailers.

Backbone officially revealed its partnership with Blizzard Entertainment and its involvement in optimizing Diablo Immortal for players on iPhone. Working with Blizzard, Diablo Immortal has been developed to be refined to its best on iPhones when using the Backbone One. Blizzard surprisingly launched Diablo Immortal on iOS and Android devices a day early on June...
Steve Vegvari
3 months ago