A few days back, we reviewed the Element Case Vapor COMP Case for iPhone 4/4S and absolutely loved it. Today, we’ve got our hands on another product from the same company, the Vapor Dock for iPhone 4/4S. The dock also supports more recent iPod models. Read on for our full review! 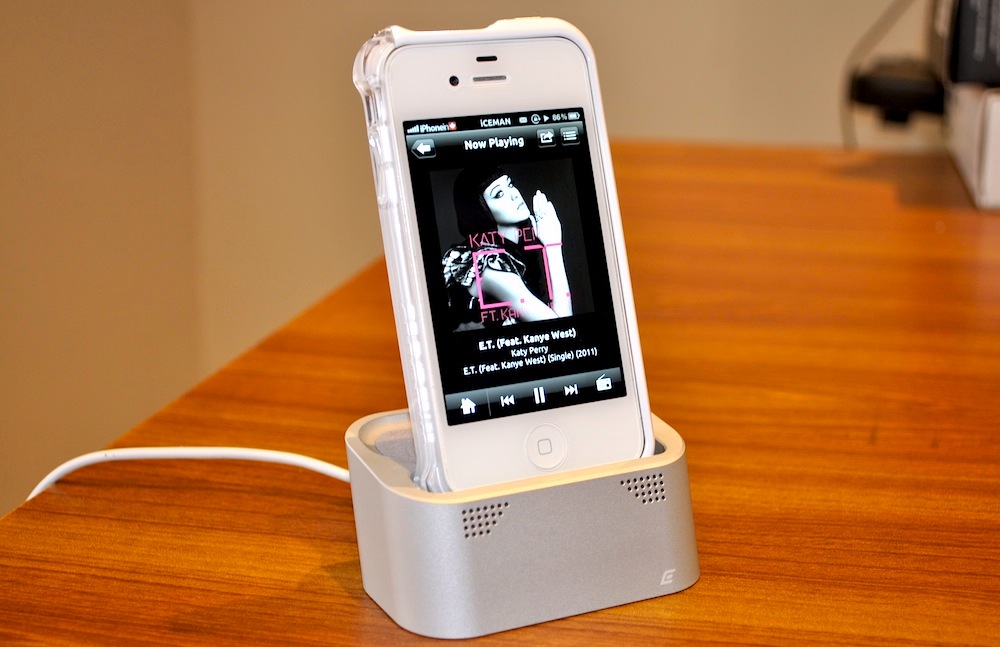 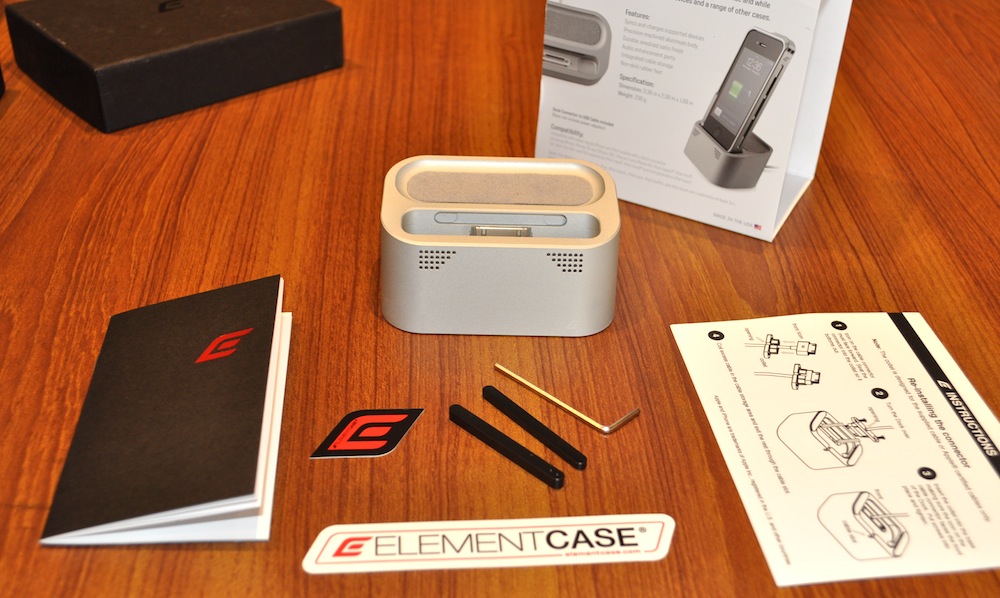 The Vapor Dock is available in either Silver or a Black satin finish. Our sample unit came in Silver, which looks and feels much like the Apple’s aluminum body Macs. Opening up the box reveals a chunky aluminum Vapor Dock, an L-shaped key for the dock’s screws, two black colored adjustment inserts for the dock and a set of instruction manuals which includes a couple of Element Case stickers. 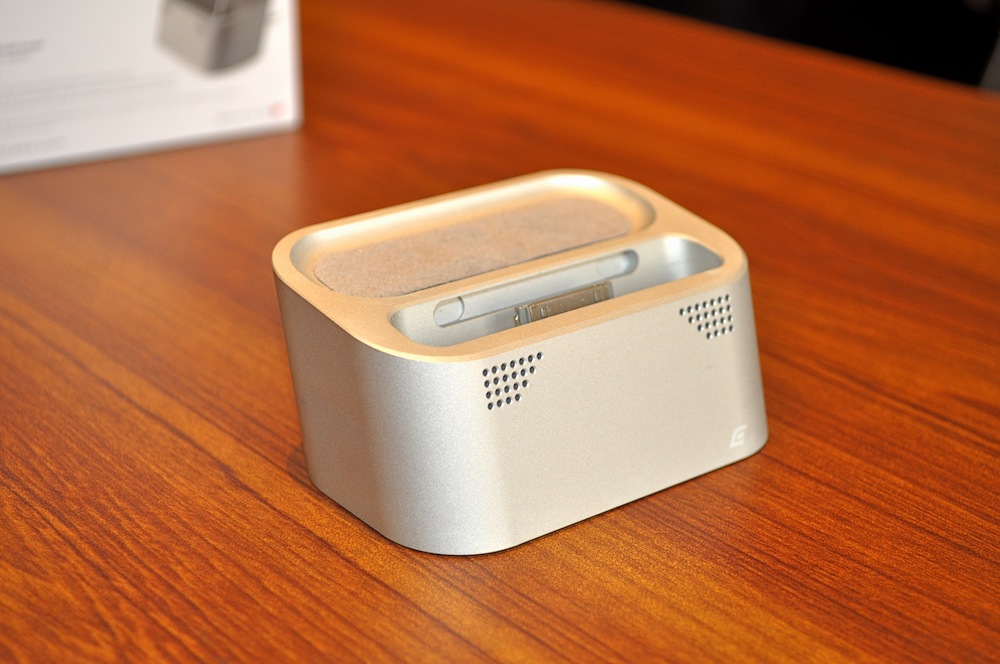 As advertised by the manufacturer, the Vapor Dock is made up of CNC Machined aluminum. The product’s smooth FLUX finish looks pretty amazing, giving it an added touch of luxury. Picking up the dock instantly makes you notice its heavier weight. You can also feel the dock’s strong and solid aluminum build.

The base hides the dock’s charge & sync cable, held nicely in place inside a guide well, which has been specifically designed for easy cable management. You can simply coil and keep any extra cable in there in order to keep your desk clear of excess cable clutter. The rear also has an engraving of the company’s logo besides a dedicated opening for the sync cable. 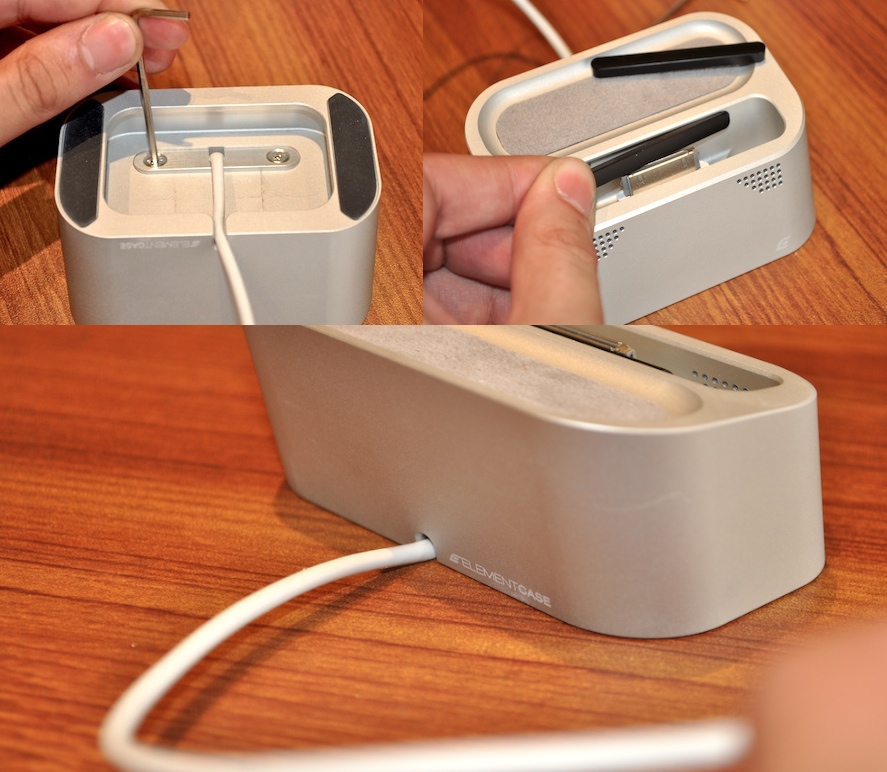 Once you pull out the USB cable, you can see a couple of screws in a metal plate, firmly holding the sync cable connector in place. The L-shaped key can be used to unscrew the metal plate and replace the cable when required. The two included black inserts, one thicker than the other, are meant to fit inside a slot in the dock’s backrest (shown above). iPhones without a case or a bumper such as the Vapor Pro or Vapor COMP (without a backplate) will fit snugly with the thicker insert while thinner one works best if you have a full body case on your device. 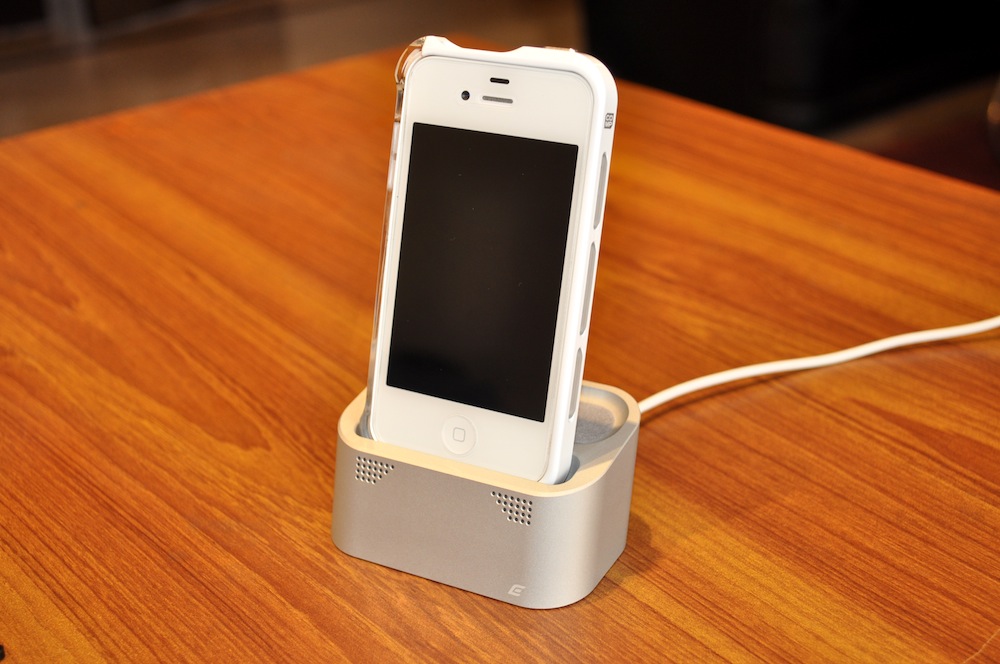 The bottom of the dock also has a couple of rubber feet to prevent the Vapor Dock from sliding on the desk or scratching a glassy surface underneath. I must mention that the quality of included sync cable is not as good as the Apple’s own cable. Therefore, coiling and keeping it under the dock repeatedly or for longer times might damage it sooner than expected. Perhaps that’s the reason why an option of easy cable replacement is provided. 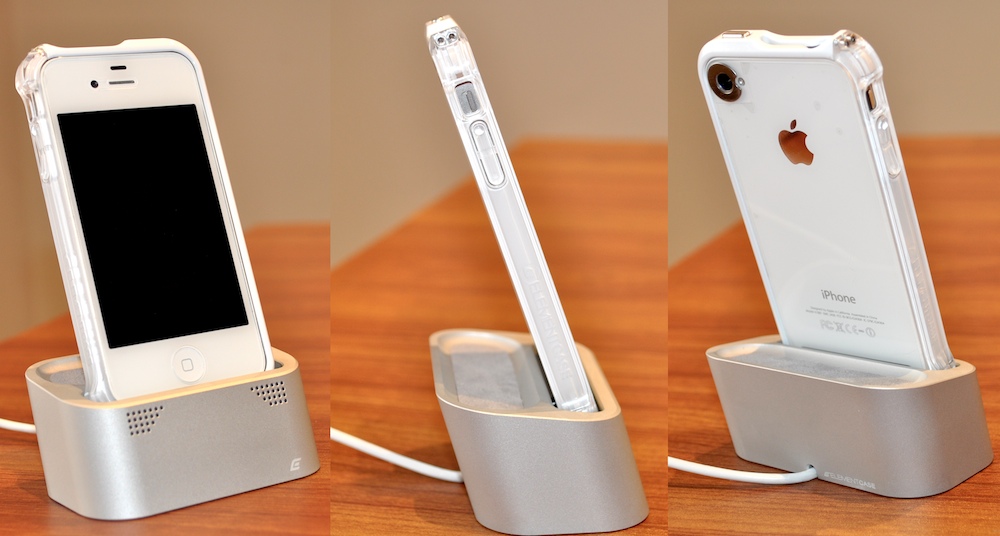 While the aesthetics of the Vapor Dock are much superior than any other charge & sync dock I own, there isn’t much difference in functionality. It does however have the ability to amplify the sound of docked device’s speakers. This is achieved by a couple of tiny machine-holed speakers at the front. The sound amplification is noticeable but is not much of a selling point though. 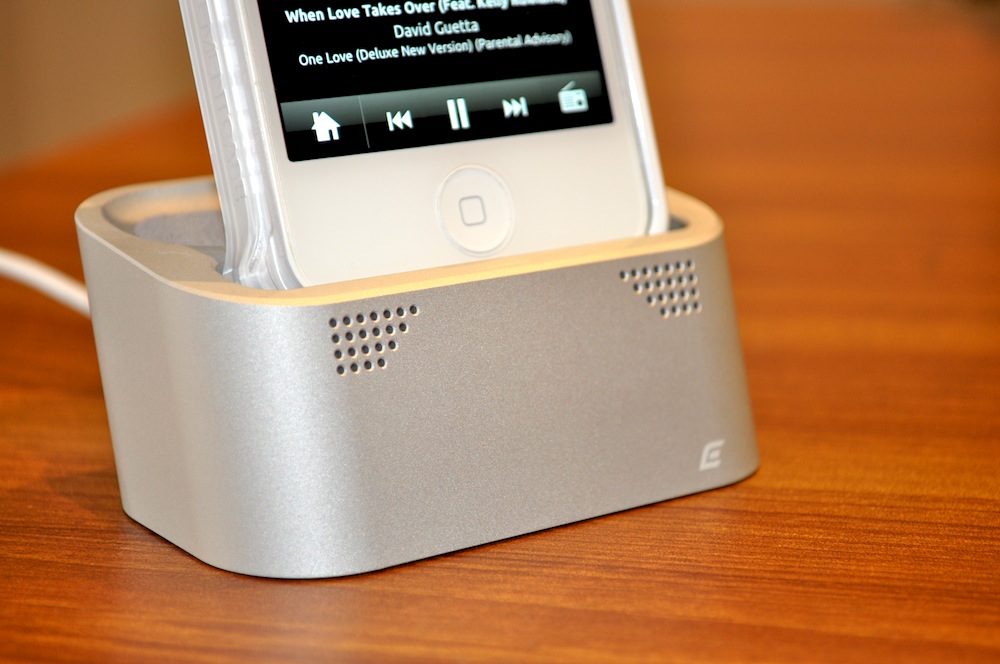 Lastly, there’s a suede-padded space at the dock’s top behind the docking slot. You can practically use it for holding just about anything small on your desk e.g paperclips, earbuds or bluetooth headset etc. 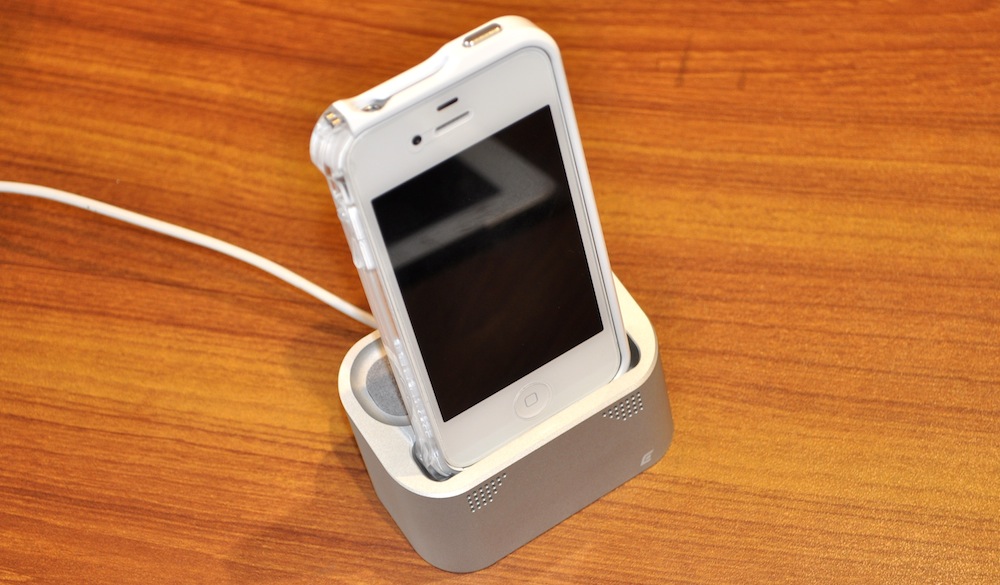 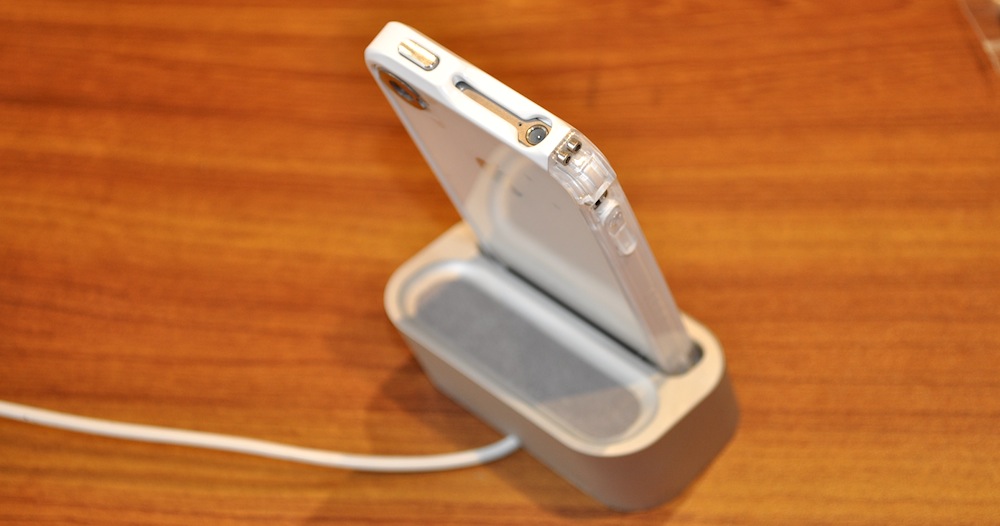 It’s pretty obvious that the Vapor Dock is priced higher than almost any other charge & sync docking station out there but let’s face it, the premium aluminum build, the superior craftsmanship, the simple and elegant design of this luxury dock has to count for something. I’d say, if you have a few extra bucks in your wallet, just go ahead and get one especially if you own an Element Case Vapor bumper. Trust me, you won’t be disappointed!