A brand new gadget from the Heart Rate Watch Company turns your iPhone into a personal GPS bike computer giving you information about your speed, distance, heart rate, and maps on a convenient bike mounted display. Bundled as the iPhone 4S Ultimate Bike Pack, the device functions by connecting to a bluetooth chest strap to monitor your heart rate at all times. The package includes a protector case for iPhone 4S that attaches to a bike mount which also has a built in an extended battery pack. 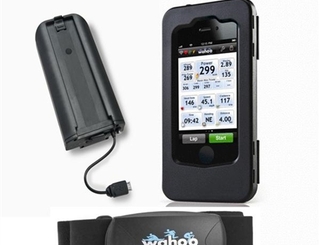 The mounting hardware that comes with it, lets you attach it to your bike’s stem or handle bars, allowing continuous hands free use while biking. The battery pack lets you use your iPhone 3 times longer, perfect for running the battery draining GPS programs on long trips.

“The iPhone 4S ultimate bike pack turns your iPhone 4S into a great bike computer that will rival most any bike computer,” says Rusty Squire, President of the Heart Rate Watch Company. “It offers unrivaled features and protection for your iPhone and if you are bringing it on your rides anyway then you might as well make use of it.”

I’m not much of a biker myself but this sure looks like a pretty handy tool for any biker with an iPhone 4/4S at his disposal. You can get it here for US $234.99.