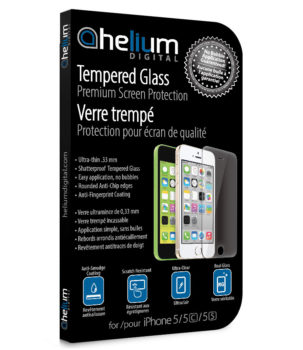 Our good friends over at Helium Digital sent me one of their tempered glass screen shields for review, and without a doubt, this is my new favourite screen shield for my iPhone 5S. Take a look at my video review.

If you’re not familiar, tempered glass is a type of glass that is processed to increase its strength. So you know you’re getting a screen shield that’s adding a good layer of protection to your iPhone. It’s also not really thick like you might expect. It’s nice and thin at only .33mm.

Helium Digital guarantees you’ll have no bubbles under the screen shield when you put it on. I usually have a ton of trouble with these installs. I much prefer ones with a spray or some type of solution, but I’ll admit I got this one on without any problems.

When the screen shield is on your iPhone it really feels like the screen is naked. It’s a nice change from some other screen shields that have some sort of texture or are really cheap feeling. The screen shield also has an anti-fingerprint coating on it. While it doesn’t prevent fingerprints or smudges, it does help limit them.

As for the durability, I put this on before I went on holidays and have had it on for a few weeks. So far, no little scratches. This is always my biggest complaint with screen shields. After a week or two they start getting scuffed up because the phone is in my pocket with my keys, coins and such. This even happens on screen shields that say it won’t. Now, I’m not saying over time this one from Helium Digital won’t start getting scuffed up, but a few weeks in and it’s still scratch free and as clear as it was when I put it on.

Overall this is screen shield is rock solid. It’s easily one of the best on the market, and trust me, I’ve tried a lot. At only $24, you really can’t go wrong with the Helium Digital Tempered Glass screen shield.
Helium Digital has been nice enough to provide our awesome readers with a 25% off coupon. At checkout just enter the code ipc25 and you’ll get 25% off your purchase.