Now, the first images of what appear to a third party party Lightning cable has made its way out of China, according to AppleInsider. Their source shares images of the purported cable, which looks identical to the original Lightning cable except for a couple minor differences. As seen below, the knock off cable is has a larger USB connector piece and the sleeve where the Lightning end is housed is wider and longer compared to the original cable (red dots): 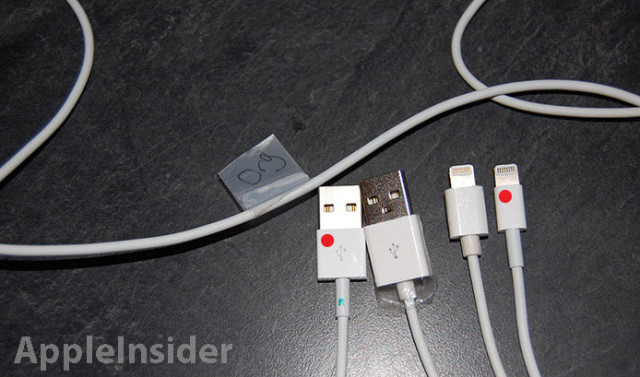 The cable source notes the build quality is decent, comparable to an engineering sample. There was no way to verify the cable was authentic or working, but the source claimed via images the knock off cable was able to connect with a MacBook Pro, recognize an iPhone 5 and transfer images.

Apple’s Lightning cable was first leaked in late August by a Chinese vendor prior to the iPhone 5 launch. The new standard is 80 percent smaller than the former 30-pin cable, which was widely used by iPods and iOS devices for over a decade. Currently, Apple offers its Lightning to USB cable for $21 CDN, with availability online set for 1-2 weeks.

If the purported cable noted above is indeed true and exactly as described, we could see a thriving third party market emerge for a number of Lightning accessories. Are you ready to jump on third party Lightning cables?