If you’re in the market for some sub $100 bluetooth headphones, you know there are more than a few options out there. 808 Audio is hoping you’ll spend your hard earned money on its newest entry into the market, the Performer BT. Here’s my review of these new headphones.

The Performer BT headphones retail for $100 US and 808 Audio also has a non bluetooth version – the Performer – for $80 US. What’s great about the BT version is you can use it wirelessly or with the provided 3.5mm cord and directly plugged into your mobile device. My review is based on the Performer BT which were sent to me to take a look at.

The headphones themselves are nice and solid. They are made from brushed metal, plastic and silicon and are surprisingly comfortable. In fact, it’s one of the big selling features of these headphones. They feature what 808 Audio calls its Flex Fit ear cup suspension technology. It’s inspired by mounts found on studio microphones to dampen vibration. 808 Audio claims the elastic suspension cable system frees the ear cups to self adjust, allowing a better acoustic seal on your head, creating superior noise isolation and great sound for hours of comfort. While you might think it sounds gimmicky, I have to say in the three weeks I’ve been using them, they are very comfortable. I don’t own a ton of headphones, but these ones are by far the most comfortable I’ve used. 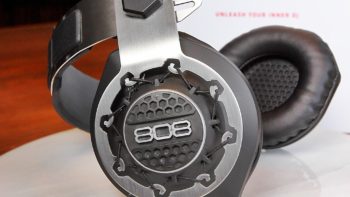 The Headphones feature 90 degree vertical ear cup rotation. Not only a nice feature if you’re into mixing music or DJ’ing but also if someone is talking to you.  The right side ear cups also feature controls for your audio. You can adjust the volume, move through tracks and even answer a call. These are nice features, but for me, the force needed to push the buttons leaves me feeling like I’m going to break them because of the plastic covering. I would much prefer something more sturdy or stand alone buttons. I know that would take away from the look, but at least then I wouldn’t worry about breaking the headphones.

The Performer BT’s can be charged via micro USB and are supposed to last 15 hours with a single charge. I’ve charged them once and they’re still going so the 15 hours seems accurate. Ok, but what about the sound? Is it any good? Well, that depends on how you’re listening.

Quickly, when I reviewed the 808 Audio speakers, I was pleasantly surprised with the sound. It was a really good balance with a little extra bass. The Performer BT headphones are a lot different. In my testing, I’ve found there is a lot of extra bass. Now I know this is a preference thing for people, but for me, I have a lot of music where I don’t want the driving bass. It’s not bad by any means to the point where it makes the audio sound bad, I just feel it doesn’t quite strike that great balance like the company’s speakers I took a look at. 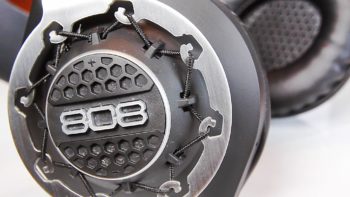 As for the audio itself, when I was using the headphones over bluetooth, there were times I could tell the audio just wasn’t as crisp as it should be. I could hear some background hiss when the audio would get quieter. It’s not overpowering but it’s definitely there, and yes, I know that this is a common occurrence with bluetooth audio streaming. But once you plug the headphones into your mobile device using the provided 3.5 mm cable – thus turning off the bluetooth connection, you eliminate the hissing all together, and you get what I feel is much better audio.

The headphones also feature a mic for taking calls if you’d like. Over Bluetooth, it was ok. I could easily hear the person on the other line, but they had trouble hearing me clearly. Again, when using the 3.5 mm cord with its mic on it it was a lot better.

Overall, I feel the Performer BT headphones have a few hiccups when it comes to audio over bluetooth. It’s nothing major and the headphones aren’t bad, but for $100 US I would like a little better sound. That being said, when plugged in they sound really good. Yes, I mentioned the bass was a little much for my liking, but it’s all about personal preference. The build quality is really good and as I said, the comfort is excellent. The Flex Fit is as good as advertised. For all these reasons I’d probably recommend the Performer headphones at $80 US over the Performer BT bluetooth version.

Let me know what you think. What are some of your favourite bluetooth headphones?