We all know how bad the battery life sucks on all current iPhones and iPods. Even the new iPhone 4S fails to impress in this particular area. An average user has to recharge his iPhone at least twice in a 24 hour cycle. This does not include charging on-the-go such as in a car or during a wired iTunes sync. Even though the battery life is way better on majority of tablets such as the iPad in comparison with smartphones, a backup battery pack is definitely among the essentials one simply cannot go without, especially a traveler with gadgets such as myself. 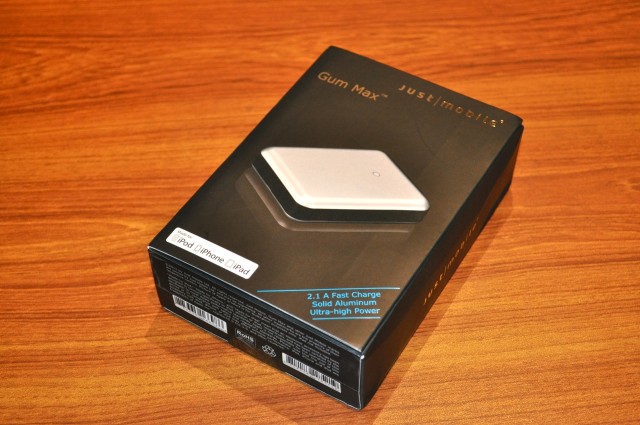 I have previously used a few backup battery solutions from manufacturers like ExoGear, Kensington and New Trent but frankly speaking, none of them actually lived to its name. Today after a week’s usage, I’ll share my experience with Gum Max™ backup battery pack from Just Mobile, a company primarily known for uniquely designed iPad / iPhone stands and holders. But before I go into the details, I must say that Gum Max™ has truly impressed me with its enormous power. 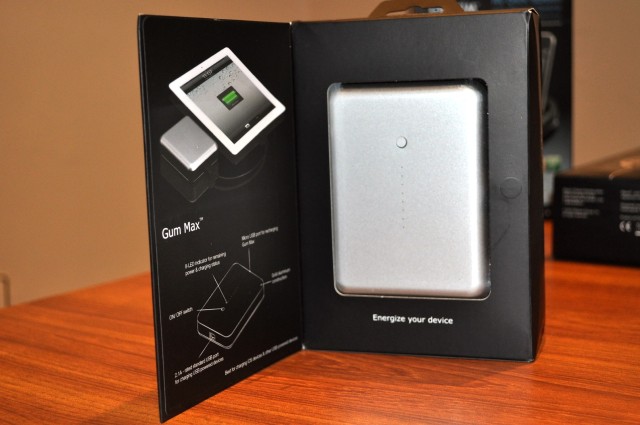 Gum Max™ comes with two cables, an Apple dock connector cable for charging the iPhone / iPad and a USB-to-micro USB cable for charging the battery pack itself. Though I was also hoping for a regular USB wall power adapter but unfortunately, it isn’t included. However, Apple’s standard iPhone / iPad charger is fully compatible with Gum Max™, so nothing to worry about. Also included in the box are a black cloth travel pouch, product catalog, user manual and a couple of Just Mobile stickers. 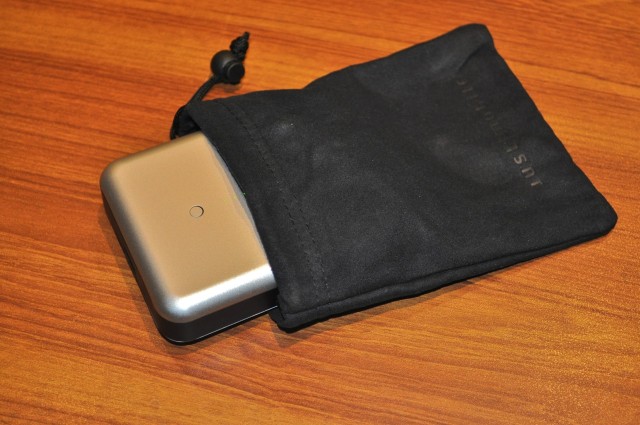 At first, when I opened the box and picked up the Gum Max™ battery pack, I felt as if the thing wasn’t heavy enough to carry the juice it claims to hold, though it turned out quite the opposite. The design is minimal and build quality is excellent which feels pretty solid when held in your hand. The matte aluminum grey shell gives it a superior look and feel. Eight green LED’s on top of the Gum Max™ light up with a small push-in button on top, telling you how much juice is left in the battery pack. 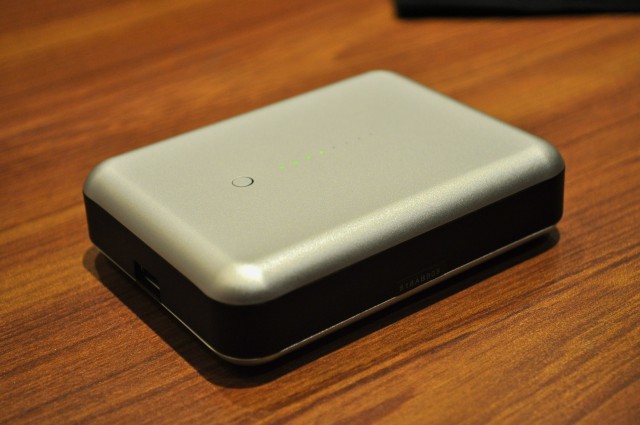 My Gum Max™ battery pack came almost 50% charged out of the box with 4 LED’s lighting up. I plugged it into the power adapter and left it for a couple of hours to reach a 100% charge. The LED’s keep blinking giving you an idea how much the battery pack has charged and stop once the charge is completed. My initial test was to charge my iPhone 4S. I was amazed to see that it took my iPhone from 20% to full with almost 90% charge power to spare. I then plugged in my iPad 2 which was completely drained of any power and guess what, it took the iPad 2 to a 100% not only as fast as it would with an Apple power adapter, but also it’s last green LED was blinking which means it still had 5-10% juice left. I was like, wow! 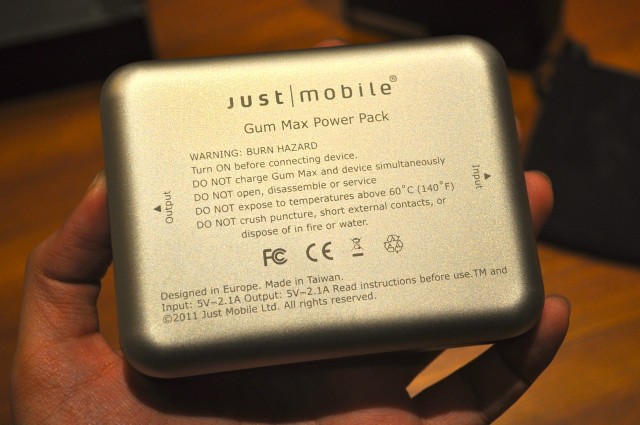 I’ve been using Gum Max™ for almost a week now and it hasn’t yet failed to impress me. I’ve fully charged my iPhone 4S almost 5 times without having to charge Gum Max™ again. Bottom line is that even though Just Mobile Gum Max™ is slightly more expensive than some other backup battery packs available in the market today, its solid yet elegant design and a whopping 10,400mAh storage capacity justifies the company’s claim of being the most “supercharged backup battery” out there! Highly recommended.