ZAGG has announced the release of their all-new ZAGGsparq, available in three different models based on charging capacity. The model names are as follows: ZAGGsparq 1220, ZAGGsparq 3100, and ZAGGsparq 6000.

These new battery chargers have USB ports to charge your iPhone or any other USB device. The 3100/6000 models have what ZAGG is calling Hypercharge Technology™ (with 2.1A output) for faster USB charging versus a standard USB port.

The new ZAGGsparqs also act as wall chargers too, as they will charge your device first before the internal battery when plugged in to the wall. All models now come with an ON/OFF switch to save battery life and have 5 LEDs to indicate battery life (controlled by a button on the side). 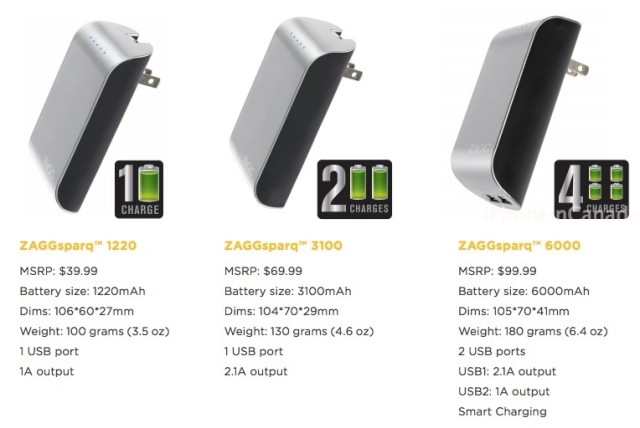 We have our hands on the ZAGGsparq 3100 so expect a review soon. With the current battery drain issue in iOS 6, having backup juice is always essential.

Click here to visit ZAGG.com to check out the new ZAGGsparqs.