When January 1, 2010 arrived that also came with a new law in BC and Saskatchewan that banned the use of cellphones while driving (other provinces have already done so). That means no more talking, texting, emailing, or web surfing while you’re driving.

If you’re caught, you can expect a $167 fine (and 3 points against your licence) in BC and $280 in Saskatchewan (four demerit points on your licence). So that means if you absolutely NEED to talk on the phone while driving, you better have a handsfree device, such as a Bluetooth headset.

The Plantronics Voyager PRO: One of the BEST Bluetooth Headsets Out There

Today we’re going to take a look at the current Bluetooth headset I’m using–the Plantronics Voyager Pro. I’ve been testing this headset for the past little while now, and so far it’s outperformed most headsets I’ve tried in terms of comfort, sound quality, and noise cancellation.

To start off, the Voyager PRO’s design is more conventional, rather than a new age look. There is an extended boom mic that can pivot and rotate, which allows for easy storage and quick setup for wearing on either ear. Volume buttons sit up top, while at the back of the battery pack is the power button and LED indicator. On the side of the boom mic is the Call Control Button (answers/ends calls; activates Voice Control on iPhone 3GS). 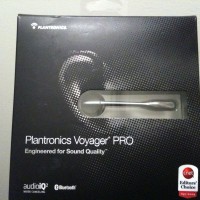 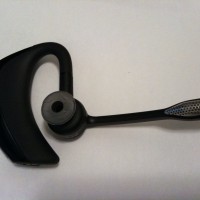 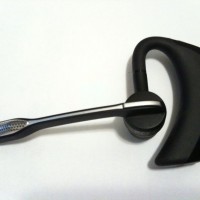 I found the Voyager PRO to be extremely comfortable on my ear and I was able to wear it for an hour without any discomfort. This is due to the flexibility of the headset and the nice balance. It just felt great on my ear since it just loops onto my ear, versus being jabbed in like other headsets. This is a very well built and solid Bluetooth headset. I was also able to connect it to my MacBook easily and use it as a headset.

How is the Call Quality?

With my barrage of calls made on the Plantronics Voyager PRO, every single caller did not know that I was talking on a Bluetooth headset until I told them. People could hear me clearly, and I could hear them extremely well. This is due in large part to the dual-mic AudioIQ noise canceling technology, which has two 3mm mics under three layers of protection. I was able to make calls while in the car and in noisy situations and loved ones could still hear me (normally people ignore me but this time they actually listened–small victory!).

The Voyager PRO’s talk time can be up to 6 hours with up 5 days/120 hours of standby, while weighing 17.5 grams. It comes with a Micro USB AC adapter and fully charges in 1.5 hours (also included are 3 gel ear tips and 2 foam covers). Not too shabby for a Bluetooth headset that was the CNET Editor’s Choice in April of 2009!

Final Verdict: Is This Headset Worth Considering?

Yes. The Voyager Pro will make you look like Rogers Customer Service rep that got loose, but the sound and call quality of this headset is second to none. It is very comfortable, has excellent battery life and did I mention people can hear you clearly during conversations? The retail price is $84.49 from Amazon.ca (free shipping!) or $99 from NewEgg.ca.

For the price, you get a headset that works exactly as advertised, although the design is not as “cool” as some of the others out there. But hey, I’ll take the Rogers/Fido/Bell/Telus CSR look any day for the amazing sound quality the Voyager PRO offers. Anyone else out there agree?