We’ve all heard and experienced too many times the often dismal battery life of the iPhone 3G.  That’s when third party solutions emerge on the market to try and help boost the battery life.  So far these have mostly come in the form of accessories that piggy back on the iPhone, and can sometimes double the size of your phone.  Recently I had a chance to test out an accessory slightly more unique, the Powerlink from Macally.

It has a 270mAh Li-ion battery built in, which according to Macally, can power your phone for an additional 25 minutes of talk time.  That might not sound like much, but coupled with the small size and portability of the unit, that could be a life saver towards the end of the day when your battery is in the red!

My phone is jailbroken, and I have the numeric battery meter installed, so testing the affect on battery life is made a little easier. In my tests, it kept my phone at, or slightly above, the same level for an hour before the last battery light went out on the Powerlink.  This was an hour of a few calls, and 3G internet use, without the screen being put in sleep mode once.

For such a small and portable unit, I think those are great numbers.  I also used it when the phone wasn’t in use, and it lasted for over 3 hours before it died on me! 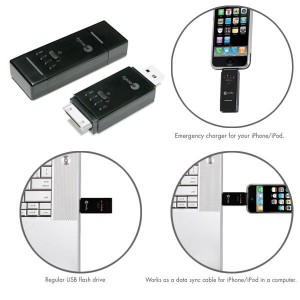 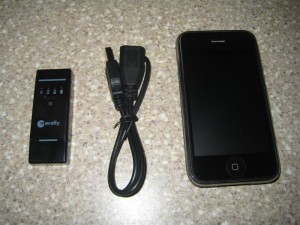 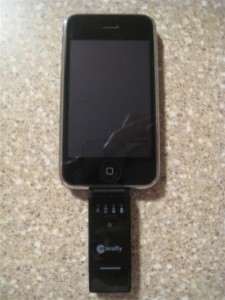 The second feature is that it also acts as a data sync (while charging) when connected to your computer.  So instead of carrying around your USB cable to sync at work or when out on the road, you can simply use the Powerlink.  In my tests, I had no problems having it sync up with iTunes.  The third and final feature is that it is also a 2GB USB flash drive as well!

Overall it is a great unit considering the size and what it can do. There are only a couple of small gripes I have with it.  The first is the size of it when plugged into your computer. Since it is a little bulky, if you have a second USB port above or below, nothing can be plugged into those ports because the Powerlink covers part of them.

This can be solved using the additional cable provided in the above picture, but that just means it’s an extra cable to carry around with you. The other one is that it would have been great if there was some way to attach this to your keychain, or something similar, to make it easier to carry around. But other than that, I would definitely recommend this to everyone.

Head over to Macally and purchase it today for $49.99!