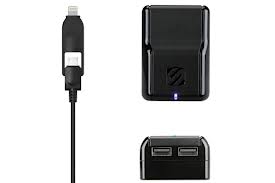 While Belkin may have been first on-the-scene with third-party accessories that are compatible with Apple’s new Lightning connector, Scosche isn’t far behind with a lineup of their own.

With 5W and 12W charging options for home as well as in your vehicle, Scosche has accommodated those who want the smaller form-factor, but hard-wired cable as well as those who prefer a detachable USB cable (giving you the ability to move it from place to place much easier without consideration for the power source).

Prices for the accessories range from USD $24.99 for the car charger with a single hardwired Lightning cable to USD $49.99 for the low-profile 12W wall adapter with two USB ports and one detachable USB cable with convertible micro-USB and Lightning tips. Several other variations are also available.

“Smartphones and tablets are an integral part of our daily lives, but keeping them all charged can create several challenges. We designed our Lightning chargers with flexibility in mind. The new line provides power solutions for home and on the go and addresses the varying wattage requirements of our favorite devices, the need to charge multiple devices simultaneously and is capable of powering multiple devices with different connections with the same charger.”

Unfortunately we have no specific launch date for any of these new products, though the company has said “some of them should ship prior to CES” in January (meaning just a little too late for holiday shopping this season).