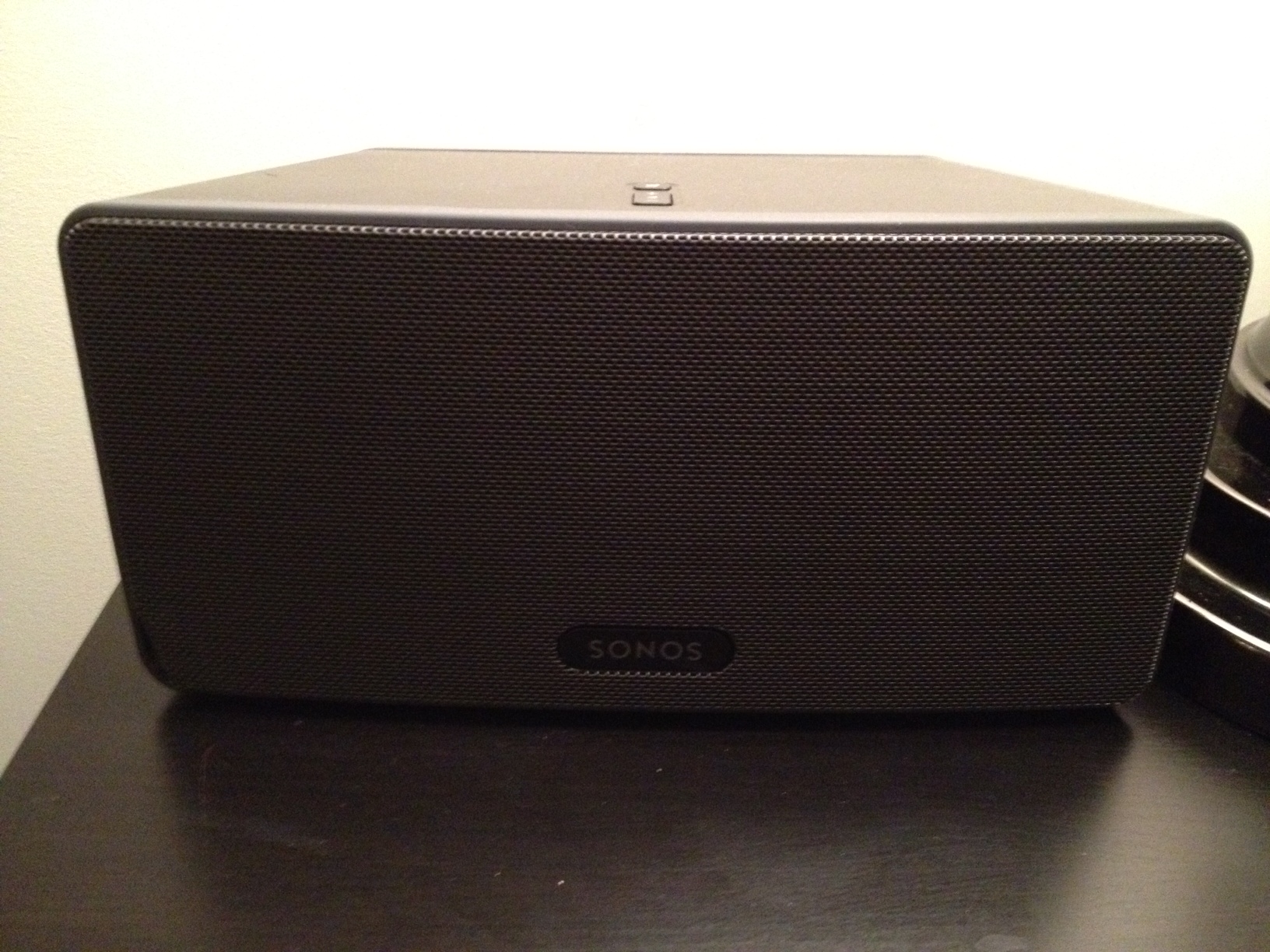 I’ve been waffling back and forth, thinking about buying a single-speaker sound-system for the past few years.  But surprisingly for a music lover like myself, I’ve kept pushing it back.

I always had the Bose SoundDock at the top of my list, and once the Bose SoundLink was released, I knew that was the speaker I wanted to get.

Or so I thought.

Sonos’ PLAY:3 system first caught my eye at Target in the U.S. earlier this year, and I was hooked immediately by the store display:

Stream all the music on Earth wireless, Easy to setup up.  Start with one player – expand anywhere.

After I was able to get my hands on the PLAY:3 system, and after a few weeks with it, I’ve seriously started to think, “Bose, who?”

Looking at the Sonos PLAY:3 – which is about the size of two hardcover books – the first thing you might think is that its design is very simple, and perhaps rather dull.

But after a few weeks, the PLAY:3 gets easier to appreciate for its simple, clean design that allows it to effortlessly blend in to any room.  It looks great by itself on a shelf, but also as part of any room display or setup.

The speaker also has tiny (negligible from afar) feet on its side, that allow it to be setup vertically, which arguably would look rather tacky on its own standing right side up.  But it looks great standing upright hidden amongst books on a shelf or especially if paired with another PLAY:3 speaker.

The Sonos PLAY:3 system is very simple to setup.  The catch though, it is almost essential to purchase the sold-separately Bridge ($59 CDN).  However, it is worth the purchase especially if you have several smartphones, tablets, computers and network drives from where you would want to stream your music.

The bridge also allows you to free your PLAY:3 speaker(s) from having to be hardwired to you wireless router.  The PLAY:3 still works sans-Bridge, but the full power of the PLAY:3 will not be realized without it.

After a quick software install on my MacBook Pro (and software update), app install on my iPhone and simple pairing – which took all but 15 minutes – I was good to go.

Sonos realized the little demand there was for their remote, and it’s probably due to its amazing app.  The main menu (and start screen) automatically directs you to your music library (Remember to turn on your file sharing in your system settings for the music folders you want to share), radio (online and conventional stations), Line-in, and additional music subscriptions (like your Sirius).

The PLAY system also has the ability to import your own playlists from iTunes, a feature I grew to really appreciate.  The music library system also mimics the setup of iTunes, making it very simple to navigate.  I set my default sharing folder to my iTunes folder, and the PLAY system automatically would reflect any changes I made.

If you are a condo-dweller like myself, the PLAY:3 system is more than ample as a sound-system.  Even at ¾ full-volume, the sound carries well from one end of my place, even towards the door.  The system does not muffle your tunes.  I do enjoy my music with a little more oomph in the bass, but the bass levels are still very adequate.

Home-dwellers might not be content with just one PLAY:3, and would probably benefit from having a second PLAY:3 speaker to allow each speaker to function as left-and-right speakers, or perhaps should opt for a PLAY:5 ($429 CDN).

What sets the PLAY:3 system apart from other speaker systems is its versatility and expandability.  The PLAY:3 system fully supports Airport Express (which I unfortunately don’t have) enabling you to stream music from all your iOS and Android devices directly.

Without Airport Express or the additional dock ($129 CDN), your music can only be streamed from folders existing on any network-drives or your computer hard drives.

Right out of the box, you instantly have access to hundreds of radio stations – both local and online.  I was blown away by just

how many local stations were available.  It’s easy to set up your local radio stations based on cities.  I live in Toronto, but felt adventurous and setup my local stations to feature Montreal ones.

Each genre (for instance Top 40/pop) would break down stations even further, based on local, featured, or all stations, and even by shows.

If you are also a fan of many genres of music (I personally enjoy some Greek, Latin and K-Pop from time-to-time) the ease in  which the Sonos PLAY:3 system brings together so much music at your fingertips makes it well worth the purchase alone.

It doesn’t hurt that the system makes the radio sound amazing at the same time, and if I have a themed-dinner night (yes, I said themed-dinner) it’s nice to have the appropriate music right there, hassle-free.

PLAY:3 uses a  proprietary wireless mesh network technology, which consistently gave me clear music, a definite step up from other Airplay enabled speakers I have been exposed to.

There is also an included audio-in port, which again, gives you another option to plug in a device like an iPod to listen to your music directly through the PLAY:3 speaker.

The PLAY:3 system is available nationwide at Best Buy and Future Shop for  $329 CDN, but many local audio-video stores also carry the Play 3.  For the store nearest you, check out their store locator.

For all you cross-border comparison shoppers, the Play 3 is $299 US at Targetin the United States, so Sonos has priced the speaker only at a 10 per cent higher price point in Canada.

I’ll be honest in saying that once I got the Sonos PLAY system up and running, I was a little disappointed that I didn’t have the ability to stream any audio from video files, but that was also because I had different expectations when first testing out the PLAY:3.

Condo-dwellers (like myself) will have no qualms whatsoever with the viscidness of the sound, as the PLAY:3 carries the sound with ease and never did the speaker seem like it was working overtime to carry the sound.

But for a music-lover like myself that can compromise audio-quality (and I am using the term compromise VERY loosely) for other features, the comfort of knowing I can expand the system at any time in the future, and along with the compatibility with AirPlay, instant access to a vast music catalogue makes the PLAY system a great long-term investment.

Also, I completely underestimated just how powerful the built-in radio system for the PLAY system would be.  Maybe I’m too accustomed to the TV/Radio offerings through cable TV, but the Sonos PLAY truly makes it easy to navigate, discover and enjoy brand new music (and lots of it) with crystalline sound.

Sonos has mastered the wireless music system, and I am thoroughly enjoying the lack of wires.  And given the instability of Bluetooth speakers and Airplay-dependent systems, it was pleasant to experience nothing but smooth sailing with the PLAY:3 in this category.

The PLAY:3 is an excellent, well-rounded system that definitely deserves prominent consideration, and compared to other similar offerings in the market, is definitely worth the purchase.

Click here to check out the Sonos PLAY:3 from Amazon.com.

Update 1: You can enter to win a SONOS unit here from Digital Smart Homes.