Stocking Stuffer: $60 Of iTunes Gift Cards For $48 From Future Shop

Around the holidays, almost every retailer has some kind of deal or discount on various products and services.

In other words, iTunes users can save $12 when purchasing $60 worth of iTunes credit! 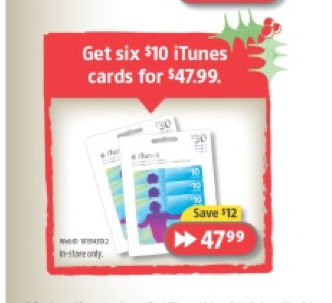 The offer is in the Future Shop mid-week flyer and has been confirmed in-store. The offer however does not seem to be available online. If you see this iTunes discount in your local Future Shop, let us know in the comments below!

Thanks to Jonathan A. for the tip!