The TidyTilt+ case for the iPhone 5 has debuted on Kickstarter, alongside the JustMount. The latter is a magnetic mount that secures to any surface to hold your iPhone 5 in the TidyTilt+ case, keys or just about anything that is magnetic.

The TidyTilt+ made news earlier as their ‘folding panel’ resembles an iPad Smart Cover–but for the iPhone. The folding panel acts as a stand, cover and also a way to wrap and store your earphones. As for the TidyTilt+ case, its magnetic back plate will allow you to attach it pretty much anywhere to hold up your iPhone. 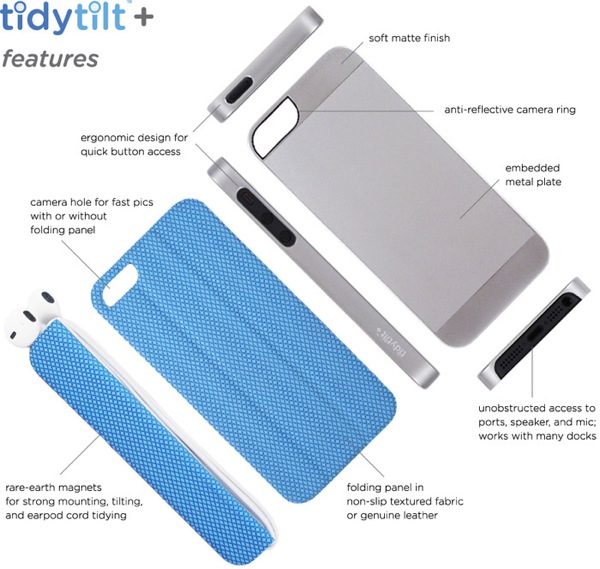 As for the JustMount, it will come with adhesives and screws for attaching to any surface. It’s safe for the iPhone and is also a smart way to hold the Lightning USB cable; I always hate picking mine up from the floor to charge my iPhone 5 (first world problems).

There are various pledge amounts and for $45 you can get both the TidyTilt+ and JustMount. Check out the Kickstarter project’s promo video below, and tell me what you think:

Anyone going to back this? I think I just might.