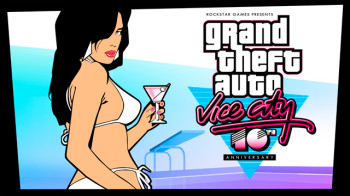 The developers over at Rockstar Games have given us an early Christmas gift: the 10 Year Anniversary Edition of Grand Theft Auto: Vice City for our iPhones and iPads. Available on December 6 (for the bargain price of $4.99), this new-to-iOS edition comes nearly 1 year to the day since we last enjoyed a title from the popular Grand Theft Auto franchise. The game will be available for the following iOS devices:

Grand Theft Auto was originally made popular as a console game and is said to have “pushed the open-world game series deeper into pop culture with a vibrant over-the-top take on Miami.” With content that is often shocking, generally inappropriate, but always entirely fun, Grand Theft Auto: Vice City is sure to become a must-have for any iOS gamer.

While we are promised a trailer and more details in the coming weeks prior to launch, Rockstar Games does assure us that we can expect beautiful high-resolution graphics along with several other enhancements including “updated character models and lighting effects, new and more precise firing and targeting options, [and] a fully customizable control layout.”

Have you played and enjoyed previous iOS releases of Grant Theft Auto? Are you looking forward to doing a little car-jacking and running from the authorities this holiday season?