Toronto’s AgileBits has announced a Thanksgiving sale for 1Password 4 for iOS and the Mac!

For existing 1Password 3 users on the Mac, upgrades are now available for 50% off the regular price for just $24.99 (normally $49.99). All you have to do is enter your existing license key to get the deal. 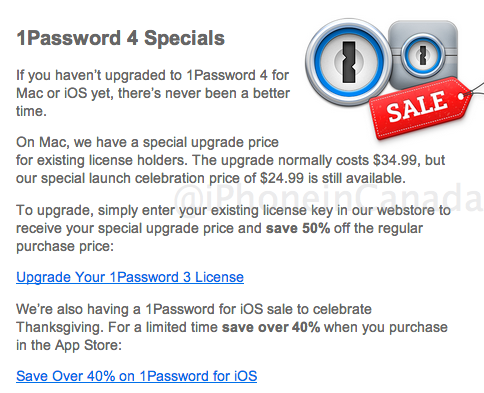 If you don’t have a password manager yet, I can’t recommend 1Password highly enough. It’s one of the best (if not the best) password apps you can get and which can easily sync data between all your iOS devices and your Mac/PC (iCloud or Dropbox sync rocks). 1Password just makes life easier and is the first app I recommend to new iOS or Mac users.