This week, the Cartoon Network’s Adult Swim has released a universal app for iDevices. Like other television-based apps, there are extra features in the app such as a schedule of shows, a clock, weather forecasts, and a calendar feature (the latter three being in the iPad version).

However the real bonus is that the app features full episodes of Adult Swim shows. Such shows include Tim and Eric Awesome Show Great Job, Family Guy, Aqua Teen Hunger Force, The Venture Brothers, and more.

If you want to check it out, the app is available in the USA App Store for free!

If you don’t already have a USA iTunes account (why don’t you?!), you can easily make one by clicking HERE. 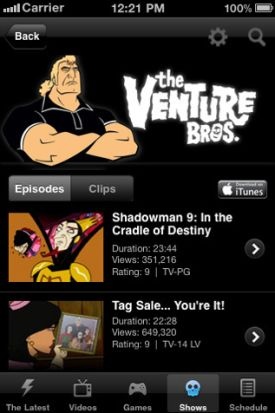