If you’re an Aeroplan points collector, you can finally add your digital card to the Wallet app on your iPhone. At the ‘Your Aeroplan Card’ screen within the app, just tap the ‘Add to Apple Wallet’ icon, to store your card digitally on iPhone for quick access:

What’s New in Version 4.2
– IPHONE: We’re still listening! Now you can add your digital Aeroplan Membership Card to Wallet so you can access it whenever you want.
– Bug fixes and performance improvements 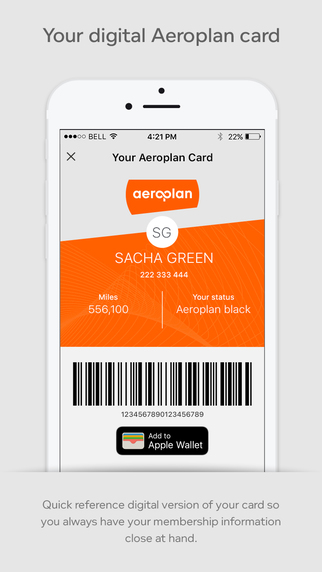 Now that your Aeroplan card is accessible within Wallet, that means you’ll be able to get to it quickly by double tapping the Home button from the lock screen (if enabled in iOS Settings), instead of unlocking your device and launching the Aeroplan app.

Air Miles, a rival loyalty program to Aeroplan, has had Wallet support for a while now, so it’s great to finally see this one arrive.