If you’re an AIR MILES collector the iPhone app recently added a new feature (at the end of August) to allow you to redeem your miles for cash and activate it within the app. Previously, AIR MILES Cash required members to sign in on airmiles.ca to activate the program, but now it can be accessed right from the iOS app. The program itself was introduced in January of this year.

The program’s new instant redemption feature shows various offers right within the app depending on where you live from participating sponsors across Canada. Once activated within the app, users can then redeem by swiping their AIR MILES card.

A couple current offers in BC are from RONA and Shell, where 95 of your reward miles can be redeemed for $10 off your transaction in store. There is a limit of $200 per day for AIR MILES Cash redemptions to protect members. 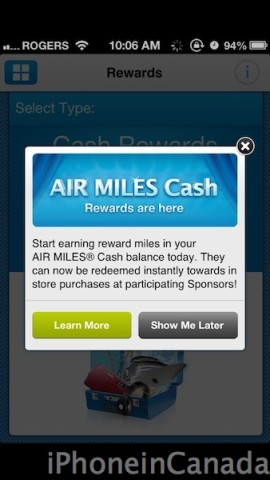 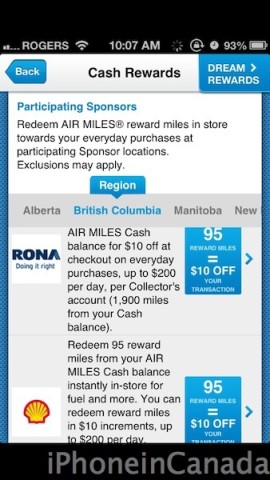 Click here to download AIR MILES from the App Store–it’s free. I’d like to see Passbook integration sometime in the future. That would eliminate one more card from your wallet. Let us know if you’ve been using this feature to redeem your AIR MILES.