A chart bearing the headline “Watch Out Apple, Here Comes The Android Market” was posted by Business Insider earlier today. It shows the app download growth for both companies: 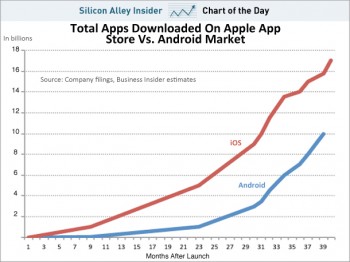 The growth of Android has been rapidly increasing with some predicting they’ll eventually overtake iOS. And the chart appears to support that view. With a larger market share and more free apps, it does make sense that Android would have more downloads.

Although, it would be interesting to see how those download number contribute to the balance sheets for both platforms and their developers. In a blog post, Marco Arment, the developer of Instapaper, notes that “Android is much less profitable for developers (especially for paid apps), its users are less influential for expanding new services, and its app development is much more painful and expensive. And in the rapidly growing and increasingly influential tablet market, Android has an extremely low marketshare [sic].”

If that’s true, does it even matter if Android surpasses Apple for total number of app downloads?