Another Casualty of Twitter’s API Rules: The News.me App 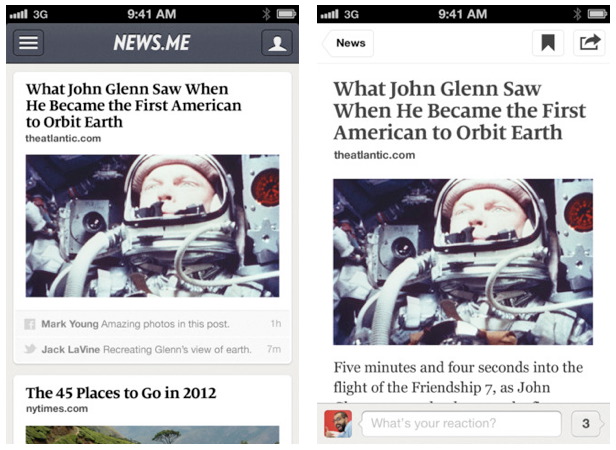 Are you a fan of the social news service News.me? If so, I’m about to be the bearer of bad news. Twitter’s ever-tightening API rules have claimed yet another victim.

For those that don’t know about News.me, it is best described as a news “curator”, which used complex algorithms to pull in news stories based on what your Facebook and Twitter friends (and their friends,) find share-worthy.

The News.me social service has announced it is axing its apps for both iPhone and iPad. The main reason cited is Twitter’s new display requirements, which was released to third party app developers in August of 2012.

The company has explained that these new display requirements will simply be too difficult to implement, given its current resources. Also, as News’me’s Jake Levine explains, “we don’t want to invest time and energy into an application that competes with a platform on which it relies.”

Can’t say I blame them.

It was a short-lived love affair between the iPhone and News.me. The iPhone app was released back in March of 2012. At this point in time, it’s no longer available for download in the App Store.

Betaworks is the company behind News.me and also the popular link-sharing service Bit.ly. Most recently, they acquired the Internet news outlet Digg, which will now be the company’s primary focus, according to Levine.

The Digg iOS app is currently available for download on the App Store.

This latest App demise is not the first casualty of Twitter’s new rules. It continues to cause problems with some third party app developers.

Personally I’m starting to get a bit worried with this new trend. Twitter is continuing to make life difficult for non-Twitter developers, which I’m guessing is an effort to sway people to use their official apps. They also recently imposed a cap on the amount of users a third party app is allowed to support.

Competition is what makes applications great. If third party apps continue to get eliminated, we’ll be at the mercy of Twitter’s official apps, which is not good. (I love Tweetbot!)