Something odd is happening with the App Store’s rankings these days, according to a report from Sensor Tower, an App Store-optimization firm, as spotted by TechCrunch: Apple is apparently using the Top Charts section of the iPhone App Store to push its own apps such as Pages, Numbers, Keynote, iMovie, and iTunes U.

What TechCrunch noticed after investigating the matter is that the aforementioned Apple apps rank higher than they normally would on some devices. This compares to the desktop version of the App Store, which shows a totally different picture: these apps are either not part of the top 20 or have different rankings.

There are two explanations for this discrepancy: 1) it is an App Store algorithm bug (interestingly, it cannot be replicated, because as TechCrunch found, the list seems to differ by device), or 2) Apple is using the Top Charts section to promote its own apps. Being in the top 20 means more downloads, more users.

TechCrunch put two different iPhone models side-by-side running the latest version of iOS. Here is what it found: on both the iPhone 5s and 6s, iMovie ranked No. 3, while Pages ranked No. 7 on the 5s, compared to its No. 6 position on the 6s. Numbers ranked No. 9 on the 5s and No. 10 on the 6s. 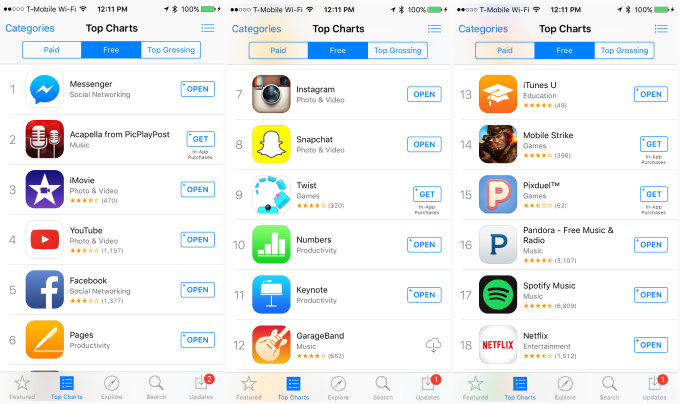 This wouldn’t be the first time Apple has promoted its own apps, but more important are the consequences: any false high rating of an Apple app would push third-party developer apps down or off the Top Charts.