Although the App Store has been heavily criticized by many, it has won ABI Research’s Competitive Assessment of mobile application storefront (via CNET), pushing Google Play into second place, while Microsoft’s Windows Phone app store ranked third. 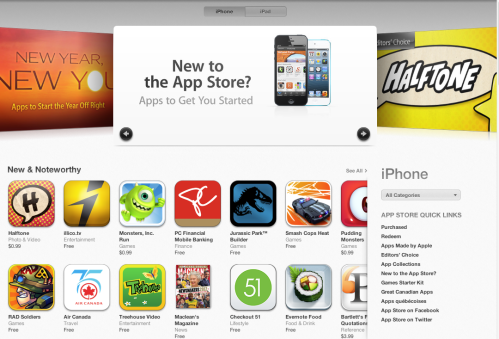 The App Store was given the no. 1 spot because of Apple’s superior performance in this dimension and effective approach to monetization and its leadership in the app industry — more than 700,000 apps, compared to 600,000 on Google Play and about 200,000 in the Windows Phone app store. Also, the App Store ranked the best due to its reasonably strict quality control despite the large inventory of titles.

However, this doesn’t mean the App Store is the best from all perspectives: from ABI Research’s perspective, Microsoft’s fresh approach to app discovery and the Windows Phone store’s overall solid usability beats Apple in terms of innovation.

“Although Apple has done a great job capitalizing on App Store’s head start as an app distributor, it should really start re-thinking the way it charts the top apps. Microsoft should be lauded for its initiative to extend its ranking algorithm beyond raw download figures, by including factors that can actually measure the customer satisfaction and retention. Retention-based charts are less prone to manipulation, so as an additional plus Microsoft can also afford being more transparent about its approach. Moves like this can help break the developers free from the ‘tyranny of downloads’, decrease their reliance on costly marketing campaigns, and thus lower the barriers to entry,” Senior analyst Aapo Markkanen commented.

As we know, app discovery is one of the most relevant issues Apple needs to solve, as its current options, the “New & noteworthy” category and “Editor’s choice” aren’t the best solutions, although it works very well, as the majority of apps are “zombie” apps, as called by Apptrace.