A game by Norwegian developer 8-Bit Underpants, that falls foul of App Store’s rule which that states any app with ‘excessively objectionable or crude content will be rejected’, has been permanently banned by Apple from the App Store. The game which is called “Joyful Executions“, is pitched as “a parody game on North Korean propaganda for children and a satire on our willingness to accept morally questionable acts through ramification” (via The Guardian). 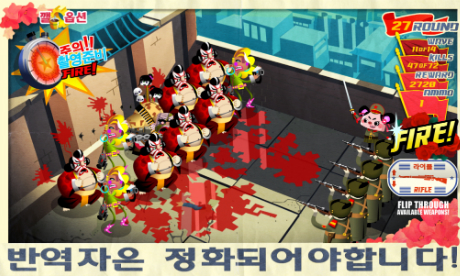 The turn based survival game puts players in charge of a firing squad tasked with killing protesters on the streets. Fredrik Nordstrom from 8-Bit Underpants said that the game was rejected by Apple after a month within its approval process due to violation of paragraph 16.1 of its App Store guidelines. However, the game developers have now released Joyful Executions for Android tablets, with an Android smartphone version soon to follow.

“It’s Apple’s right to decide what they want and don’t want for whatever reason they fancy. However, as a developer, I would appreciate a more consequent and traceable implementation of their guidelines,” says Nordstrom.

The game may also have come up against a separate clause in Apple’s guidelines, 15.3: “‘Enemies’ within the context of a game cannot solely target a specific race, culture, a real government or corporation, or any other real entity,” it explains. Even with satirical intent, seemingly.

In the past, Smuggle Truck game by Owlchemy Labs, which saw players smuggling immigrants over the US border, was also blocked by Apple’s approvals team for its satirical intent.