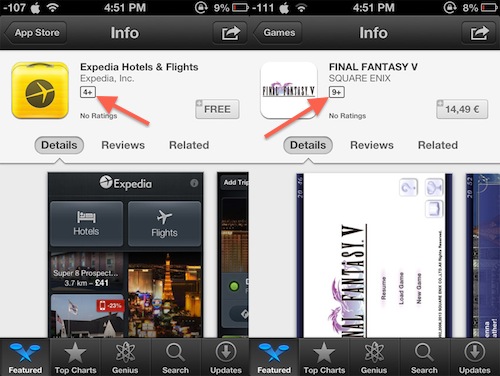 Apple has tweaked the App Store as we know it by adding a small information box placed below the title and developer’s name (via Apple Insider). With this move, age rating gets a welcome highlight; this information is now one of the first things users will notice prior to downloading the app.

Apple’s App Store approval process came under scrutiny earlier this year when Vine displayed pornographic content at launch, while it was featured as an “Editors Pick”.

You may recall that we have reported several outstanding cases involving in-app purchases where children left in the company of an iPad have spent thousands of dollars in minutes, or over several months.

Alongside the aforementioned in-app purchase issue and Vine’s pornographic content, Apple withdrew 500px, a popular iOS app, earlier this year, due to nude images, claiming it lacked a safesearch feature. The app is now back with a 17+ age rating for adult content.