TechCrunch notes Apple has launched a new section for Newsstand called “Read Them Here First” which allows Hearst magazines to be available on iOS before print or other digital subscriptions. Currently, there are 20 titles available in the Canadian App Store with top magazines such as Car and Driver, Cosmopolitan, O, and Popular Mechanics. This brings exclusive access to the publisher’s magazines to Apple’s Newsstand. Hearst hit 800,000 digital subscriptions as of the end of 2012. 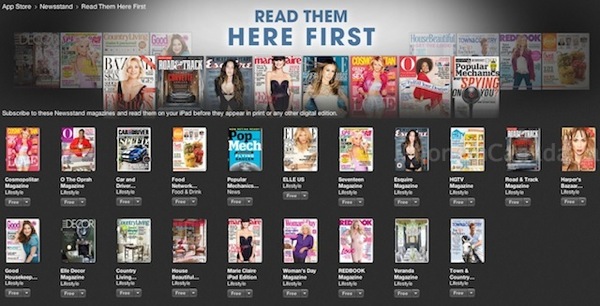 According to Hearst PR representative, Alexandra Carlin, in a statement to AllThingsD, early access to magazines depends on the publication but it will apple to single issues or subscriptions. Moreover, Carlin reveals it was Apple that suggested the new idea:

“Apple suggested this initiative, and it’s a great offer they can provide to their newsstand users. We’re always working with our retail partners on unique ways to drive consumer sale and engagement.

An Apple rep also told AllThingsD it would be open to letting other publishers try the same thing.

Right now, yearly digital subscriptions seem to offer better value than buying individual issues. Car and Driver single issues are $4.99, while annual subscriptions cost $19.99. If you are hooked on Hearst magazine publications and want to read them first, you’ll be able to do so via Newsstand.