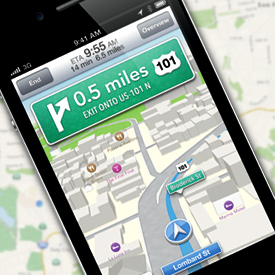 According to an interesting PCMag article, Apple Maps app seems to lead the way in navigation, despite all its flaws and inaccuracies. When put to the test against Waze and Google Maps, Apple Maps came out on top providing better navigation among the three. The author and his friends drove around in three separate cars, each with a different navigation system, with several places to stop including 1 Infinite Loop at the Apple headquarters in Cupertino.

The guy using Waze was misdirected in one instance and took forever to get there. He got lost for unknown reasons at another target location. “Overall, he—and Waze—came in third (and last)“, says the author. Google Maps was the system of choice for the author himself, who was directed through the city streets for a cut across town and reached the destination second. Finally, the guy who was using Apple Maps, arrived at least five minutes ahead of him.

Glenn, who actually inspired my idea for the test, was using Apple Maps, which he switched to after iOS 6 dumped Google Maps. “I don’t have any trouble with it,” he said. “It works fine.” In fact, it worked better than Google. On one leg from the Apple facility to a shopping mall, Glenn beat me, though just barely. Leo was the laggard. But then from that location to a lunch spot, Glenn and I followed each other. Suddenly, Glenn jumped on to the freeway as Google Maps directed me through the city streets for a cut across town.

At the time, this seemed like a better route, not to mention a more scenic one. But the long stoplights in Sunnyvale are dreadful. Glenn arrived at least five minutes ahead of me. I gave the nod to Apple and now wonder what the fuss was about.

I have loved Google Maps until recently. I’m noticing that it is getting a little ragged. On this occasion, at one fork on 101, it told me to turn right to go south when 101S was left.

Looks like Apple Maps won this battle in the end. As the author calls it, “mistake, gag, or insult? you choose“.