Apple has released a relatively minor update to its Apple Store iOS app, which brings new options when it comes to setting up your shipping options for individual items. This update means you can decide which items you want to ship faster than others. Since Apple has free shipping on orders over $75, it’s worth it sometimes to pay extra for expedited speeds (we’re all impatient when it comes to Apple goodies).

What’s New in Version 2.5
– New delivery options make it even more convenient to get your Apple products. Choose different shipping options for different items in an order.

Below is a screenshot of the minor update. Notice how you can set individual shipping options for your cart during checkout: 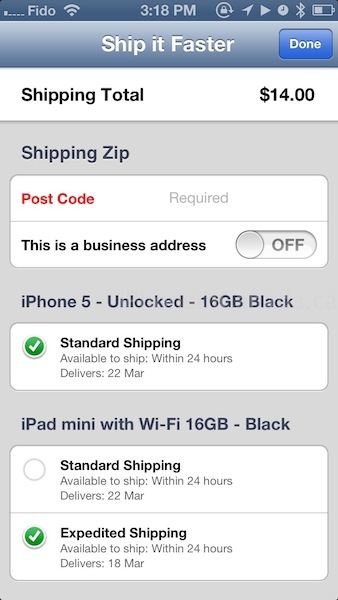 Last November, the Apple Store app was updated to support EasyPay for Canadian users, allowing customers to scan items in Apple retail locations and run the checkout process themselves. Have you been using EasyPay?