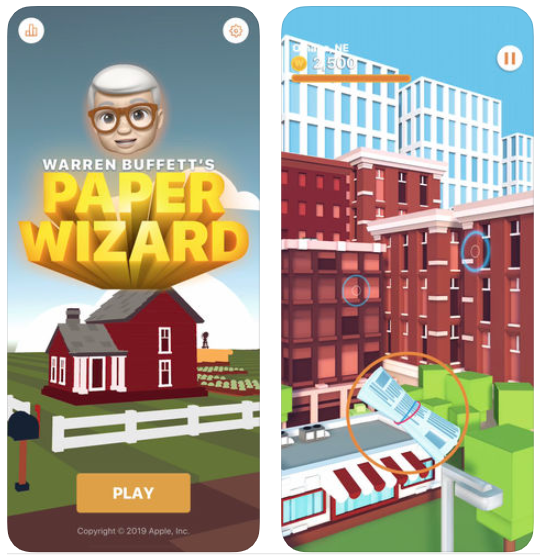 According to CNN, it was here Cook unveiled a new game called Warren Buffet’s Paper Wizard, a game where you toss papers for points, just like the classic game, Paperboy:

If you go to the App Store, there is now a new game called Warren Buffett’s Paper Wizard. It’s a nod to Buffett’s childhood job of delivering newspapers. Buffett used to do a live paper toss at the shareholder meeting, but he’s now doing it virtually instead.

In an amusing video promo at the start of the shareholder meeting Saturday, Buffett was shown trying and failing to come up with ideas for an app, including a Time Machine where Buffett tells a kid version of himself to buy Apple stock — which is now Berkshire’s largest holding.

Cook then comes up with the idea for a newspaper toss.

As spotted by MacRumors, despite the developer being named Wildlife Designs Inc., the terms of the app reveal it is actually Apple behind the game–its first gaming release in 11 years:

While the game’s developer is listed as Wildlife Designs, Inc on the App Store, the app is copyrighted, maintained, and operated by Apple according to its terms and conditions, making this the first game Apple has developed for the iPhone since Texas Hold’em back when the App Store launched in 2008.