Knock 2.0 for iOS Released: Unlock your Mac with Apple Watch

Knock for iOS allows users to unlock their Mac by tapping on their iPhone, which we concluded to work like a charm back when it launched in 2013. Today Knock 2.0 for iOS has launched, which brings an app for Apple Watch, so you can unlock your Mac from your wrist. 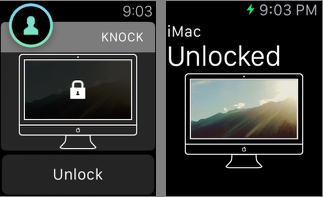 Knock 2.0 also brings a ‘Touch to Unlock’ option to require Touch ID on your iPhone (or a tap on the Apple Watch) to unlock your Mac, to bring two-factor security within the app.

The app also brings Admin Password Support, so you can use Knock to install software or unlock System Preferences. Alongside these new features, the app has been improved for better speed and stability.