Apple’s free App of the Week is Marvel’s Avengers Initiative, a winner of of IGN’s People’s Choice Award, which is part of the reason why the app is now free (it coincides with Apple’s weekly pick it appears). The game comes in at a 1.54 GB download and is optimized for the iPad mini, Retina iPad and supports resolution for the iPhone 5.

Level up, gear up, and fight as CAPTAIN AMERICA or HULK in the latest installment of Marvel’s episodic series built exclusively for touch screen devices. Track down and defeat some of the world’s most notorious villains and help THE AVENGERS pull the world back from the brink of catastrophe. 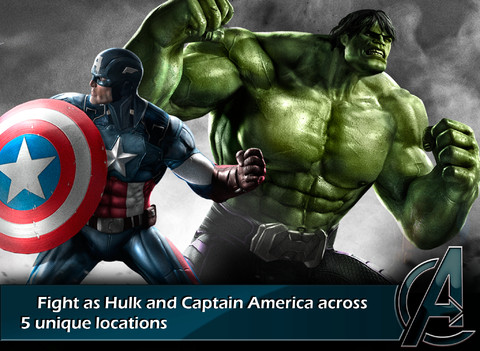 Two episodes are within the game:

Episode 2: As HULK rounds up escapees from The Vault breakout, Nick Fury briefs CAPTAIN AMERICA on a top secret mission: S.H.I.E.L.D. security has been compromised by an unknown traitor and Cap must ferret out the mole to find out who or what is behind this dangerous new threat. Cap takes the fight to an ambushing HYDRA Helicarrier and faces a merciless rival.

Episode 1: In the wake of The Pulse, The Vault, a top-secret S.H.I.E.L.D. facility in the Rocky Mountains, has busted open, releasing all of the super-powered criminals and monsters imprisoned there. Aboard the S.H.I.E.L.D. Helicarrier, Nick Fury recruits a reluctant HULK to round up all the monsters he can while S.H.I.E.L.D. can assemble the rest of THE AVENGERS to figure out who opened the doors to The Vault — and why.

This looks like a fun game to play over the holidays. Click here to download Avengers Initiative, while it’s free. Tell us what you think of it!