Apple’s free App of the Week released on Thursday was Toca Band. This app is geared for children aged 2-9 to to explore music with their parents. The app lets your kid try out 16 characters that play their own instruments within the app, which also includes 48 fun sound loops. There is no right way to use the app, it’s essentially a fun way to experiment with music freely. The app is designed for the iPhone and iPad.

Toca Band is getting ready for their big concert and needs your help to mix beats and sounds together for their hit song! Toca Band is a fun and easy toy that encourages children to explore music in a new creative way! Choose from 16 different cool characters – each with their own unique quirky sound and musical rhythms. Put your band members on stage to get the music started – then move them around and see what happens! Try out new band combinations, explore different sounds – and while you’re at it, why not give the lovable rapper, Stikk Figga something he always dreamed of: a solo performance! 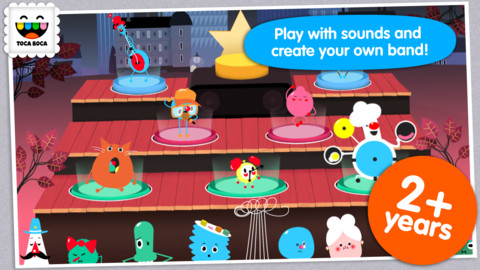