AppShopper, a popular app discovery network (sister property of Apple rumours juggernaut, MacRumors) has announced it has returned to the App Store, after being removed by Apple last December over a conflict of rules introduced with iOS 6.

It has returned now as AppShopper Social, a brand new app with iPhone 5 screen support to enable users to once again keep a Wish List of apps but also introduces new social features, such as adding and following friends. Your main stream will then show apps your friends have added to their own lists. Twitter integration allows you to add AppShopper friends on the social network. 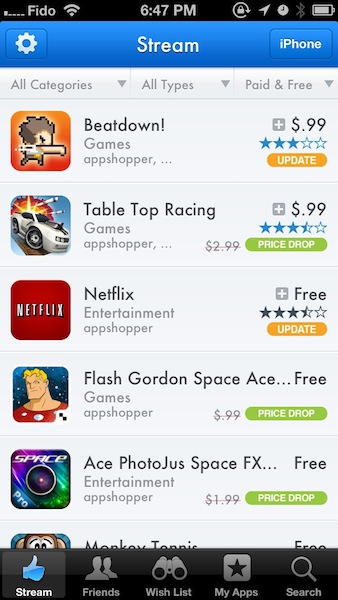 The app retains some features of the original app such as push notifications for price changes and updates of your favourite apps, but previous lists of ‘What’s New’ and ‘Top 200’ are absent, but could be coming back soon. An iPad version hasn’t been updated yet but it will be coming along with universal support.

Click here to download AppShopper Social–it’s free. It’s one of the best ways to discover new apps in the vast sea known as the App Store.