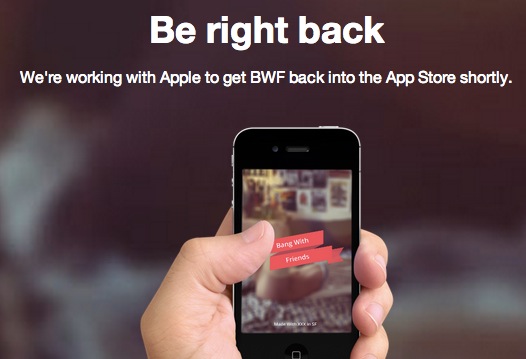 According to CNET, Apple has pulled controversial app Bang with Friends from the App Store, after it debuted last week. Titled BWF Official when it was in the App Store, the matching service–which recently surpassed 1 million users–allowed users to connect their Facebook accounts and find friends who were “down to bang” each other.

“We’re working with Apple to figure out exactly why,” a Bang With Friends spokesperson told CNET.

Co-founder Colin Hodge confirmed with Valleywag Apple had removed their app from the App Store. Users can enter their email on the BWF website to get notified when the app will return to the App Store. At this point in time, it appears too early to conclude whether or not Apple was flexing its censorship over the app’s intended service.

Anyone have luck (or get lucky) using this app?