Apple’s iPhone 6 and iPhone 6 Plus has the next-gen M8 Motion Coprocessor, which also adds a new barometer sensor. If you want to measure atmospheric pressure from your new iPhone, Barometer for iOS is one of the first free apps to let you do so.

Developer Peter Breitling tells us his app uses the CoreMotion API, which was extended to add the barometer sensor in iOS 8 for iPhone 6 and iPhone 6 Plus.

Apps are unable to define the refresh rate (whereas the accelerometer/gyroscope can get 100 values per second) as of now, but every 1.3 seconds a new value is reported in kilopascals along with relative altitude, which starts at zero. 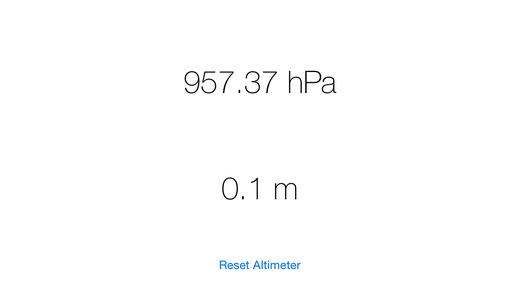 Breitling says they are working on updating the app to make it more visually appealing. This simple app is a great way to check the barometer sensor on your iPhone 6 or iPhone 6 Plus and see the values being reported by the API.