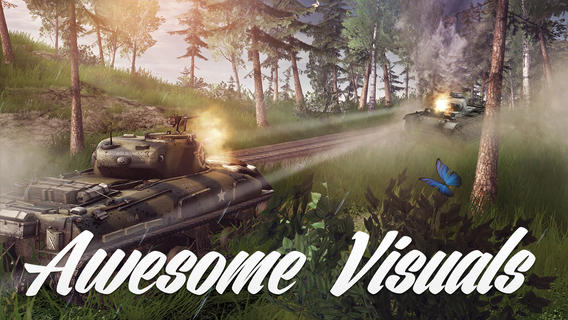 Battle Supremacy is the developer’s next war title after Sky Gamblers won an Apple Design Award at WWDC 2013. The award goes to the developer based on three criteria: design, innovation, and technical excellence.

The new title is a WWII tank battle game that puts players on the front line in real cities, forests, and mountain villages, and on real beaches. Watch the trailer below:

From the game description:

Unleash the full power of your iOS device in Battle Supremacy, a WWII tank game with thrilling gameplay and showoff-worthy visuals.

Explore a fully-interactive open world never before seen on mobile devices, and do it by land, air or sea.

Feast your eyes on amazing landscapes and landmarks: entire forests teeming with wildlife, sprawling real-world cities with tunnels and bridges, overrun by tanks, trains, warships; there are even fish in the water!

Unlock historically accurate tanks and take part in epic WWII campaigns across France, Russia and the Pacific islands. Lead your tank brigade to victory in over a dozen missions.

Battle Supremacy costs $4.99 and requires iOS 7, so it will be compatible with all devices running Apple’s latest OS, and it also supports all iOS MFi controllers.