Only a week after launching the iPad exclusive BBC iPlayer in Canada for the monthly subscription price of $8.99 CDN (or $84.99 annually), the BBC is rolling out the next phase for bringing UK content to all iOS devices. Today, the iPhone and iPod Touch version of the iPlayer are available for download, bringing that same great content to handhelds. 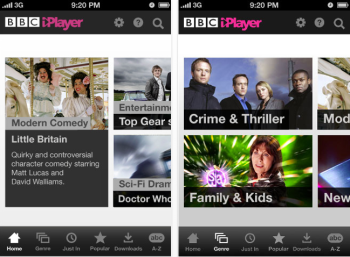 Currently, the BBC iPlayer app is offering some great free content every day until December 25th, including an episode of Walking with Dinosaurs, along with a few Christmas specials from various shows.

The BBC iPlayer app works over 3G and WiFi, and brings AirPlay capability for streaming to your Apple TV (2nd generation).

A subscription to the app will be accessible across all of your iOS devices. We posted a review of the app earlier this week; read it here.

Grab the app and let us know if you decide to subscribe.