For frequent flyers on British Airways, boarding is going to get a whole lot easier as the company has updated their iPhone app with Passbook support for boarding passes, with support in over 100 airports worldwide.

What’s New in Version 4.4
Please note: if you are using iOS5, we do not recommend that you update to this version due to an issue we are currently resolving. We will be releasing a version with iOS5 compatibility imminently.

We have added boarding pass integration into Passbook.

From now on, all new boarding passes will be presented in Passbook. You’ll be able to download them from the app as usual and continue to use boarding passes on your iPhone in over 100 airports worldwide.

By mid June we’ll be enhancing Passbook boarding passes by adding direct links to them from your iPhone’s lock screen as you’re ready to fly. This will make it even easier for you to access your boarding pass on the move. We’ll send you a message via the app as soon as these are enabled. 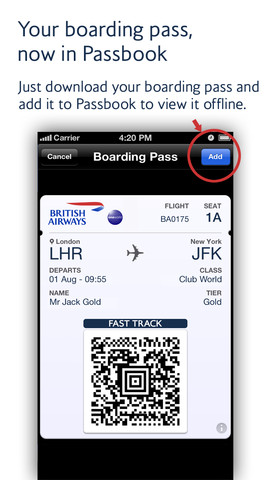 The company notes in mid-June they will be adding direct links from your iPhone’s lock screen to access Passbook boarding passes, and will update customers when it is available. For Canadians flying to Europe, this app will come in handy.