Buy iTunes Cards For 20% Off At Safeway

Last week Safeway, a Canadian Grocery Chain located in Western Canada, discounted iTunes cards by 25%. If you bought $60 worth of gift cards you would get $15 off the purchase. Today is the last day to take advantage of that offer, but for those who can’t make it to a local Safeway today, no worries, a new deal starts tomorrow.

As part of Safeways’s Christmas Gift Ideas promotion, if you spend $100 on iTunes cards you’ll save $20. The offer is good at any Safeway in Canada. To take advantage of the deal you will need a coupon; it can be found here. They prompt you to print the coupon, although the Manager of a Safeway in Calgary indicated that an image of the coupon on an iPhone would be valid. A screenshot of the coupon is present below. 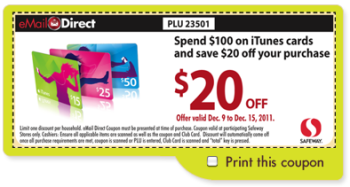 The offer starts on December 9th and expires on the 15th.

Some restrictions apply: There’s a limit of one per household and you have to have a Safeway Club Card (membership is free).