Camera+ today celebrates its two year anniversary of the launch of 1.0, and coincidentally 8 million downloads as well (they hit 6 million downloads in January). Camera+ now has a team of 17 people and already have their latest update planned in the works:

Some of these areas are pretty substantial and you’ll all be seeing the results of one sub-team’s work in the next few weeks. I’m not going to spoil the surprise but I’ll just say that the next major release of Camera+ has been in the works for a very long time and it’s going to make many of you very happy.

In addition to this upcoming release, which we’ve code-named “Darkroom”, we currently have four other major areas that the various sub-teams are focusing on. In the coming months, you’ll be seeing some pretty awesome things that we’ve all been slaving over.

The tap tap tap team also notes they have turned down numerous acquisition attempts from Adobe, Zynga (for The Heist, not really for Camera+), Google and recently, Twitter. Every single time though, they have stuck to their roots and declined selling out to the highest bidder. 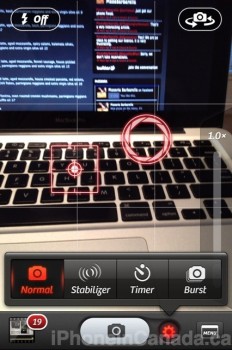 Mad props to the Camera+ team for keeping it independent, it’s pretty rare nowadays. That independence has allowed them to churn out awesome update after update, making Camera+ my go-to app for post processing on my iPhone, plus their recent API allows users to choose pics straight from the app within other apps such as Tweetbot. Congrats on the two year anniversary!