TechCrunch reports on a new app called Carat that will attempt to increase your iPhone battery life–by telling you what apps to kill. Sometimes rogue apps cause unnecessary battery drain and by sending your anonymous phone data to Carat (they promise not to sell your data etc), over a few days the app will reveal the apps you can force close to better your battery life.

Carat was not developed to make a profit, but to serve as a tool to help our gadgets last longer based on crowd sourcing data. As for the people behind it–they are university scientists:

They’re a team of top-notch M.S. and Ph.D scientists from the UC Berkeley electrical engineering and computer science department’s Algorithms, Machines, and People Laboratory (AMP Lab). Carat wasn’t built to make money. It’s the consumer product of cutting-edge battery science and a way for the team to collect more anonymous, privacy-respectful data for research that could make all our devices last longer.

As you use your device, Carat occasionally takes measurements and sends them to our backend servers in the cloud, where we apply cutting-edge algorithms to determine what steps you can take to use less energy. By collecting snippets of non-personal data from a large number of devices, Carat does not need to run continuously in the background. Nothing we collect identifies you, personally.

Early data has revealed Skype, Yelp and Pandora are the highest energy hogs as they require more battery life compared to other apps. I’ve installed Carat but it will take a few days for the app to compile a list of apps I should kill. I’ll keep you updated. 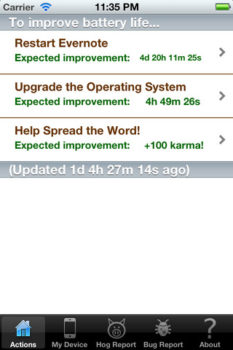 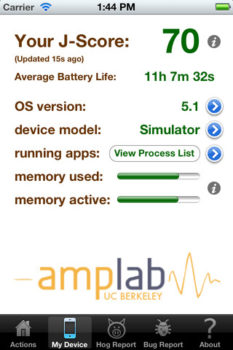