CBC News has updated their iOS app to announce support for Apple Watch, which will bring breaking news to your wrist. Latest headlines will be viewable via the device’s Glances feature, while Handoff will be supported so you can continue reading articles on your iPhone.

What’s New in Version 3.1.0
CBC News now available on Apple Watch. Receive breaking news in push notifications, see the latest headline in a Glance, get more details in the Watch App and then seamlessly continue reading the story on your iPhone. 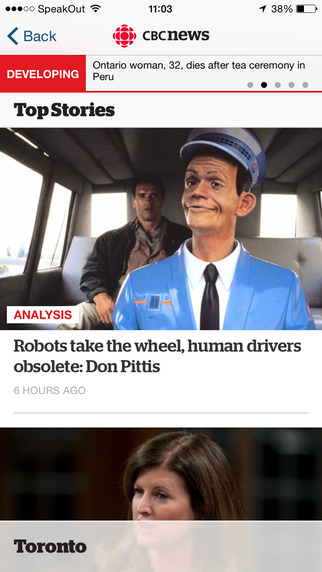 The app received a major update for iOS 8 back in December to bring breaking news push alerts to Notification Centre.

We can probably expect CBC News on Apple Watch to look similar to how other news publications will look on the wearable, showing snippets of titles and also allow for short summaries of articles, as we’ve seen with The New York Times and The Globe and Mail with their apps. You can check out other Canadian Apple Watch apps here.

We’ve reached out to the CBC for screenshots of their Apple Watch app and will update this post.

Update: Here’s an image the CBC shared with us about their Apple Watch app, which they announced in a story last week: