Approximately 100 CBC national and international news reporters will have the capability to broadcast live video from their iPhone or iPads using the Dejero LIVE+ mobile app, which connects with Dejero LIVE+ transmitters and servers. The technology has already been in use for some regional and national news broadcasts, with the ability to transmit both high definition and SD quality video.

The Dejero LIVE+ Mobile App gives broadcasters the ability to transmit high-quality live or recorded video from an iPhone or iPad. Dejero wireless broadcast systems have been used in many broadcast environments, including coverage of the most recent Summer and Winter Olympic Games.

The App aggregates bandwidth from both the WiFi and cellular connections in the portable media device, resulting in a higher quality live video transmission with lower latency than a single connection would provide. 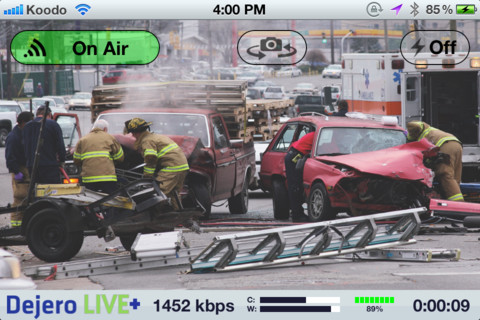 What’s unique about the system is its ability to transmit live or recorded video using both cameras from the iPhone or iPad during a single broadcast; this will allow reporters to deliver the news without a satellite truck or any other equipment.

“Like many broadcasters, CBC was seeking a cost-effective solution for increasing media acquisition in the field. The LIVE+ Mobile App enables reporters to quickly and easily broadcast high-quality live video from an iPhone or iPad that previously would not have been possible.”

Dejero is based out of Waterloo, Ontario. This is just another example of awesome innovation, utilizing iOS devices and the iOS SDK.