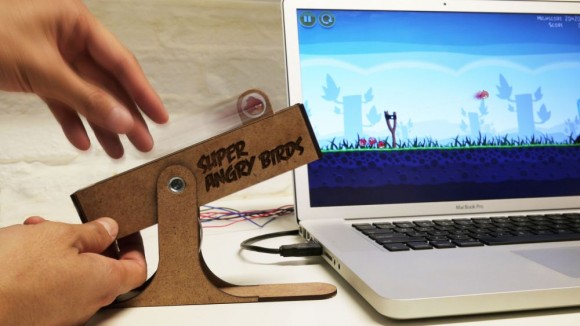 If you own an iPhone or iPad, bets are that you’ve had a chance to play Angry Birds. It’s one of the most popular games in the history of mobile games. To those who at this point actively enjoy the bird-slinging game, you’re going to love this.

A controller labeled ‘Super Angry Birds’ was created by Hideaki Matsui and Andrew Spitz as a school project. The creation process was extremely easy, using just a hacked motorized slider and a micro-controller. The guys didn’t just stop there, they carved out wood and painted it creating an eye-popping controller.

Here’s how they made it: (via SoundPlusDesign)

We hacked a motorized fader found in audio mixing consoles to create the force feedback. If you are interested, you can read the paper. Basically, the way we achieved this is by drawing a force curve and storing the values in a table, then we send the current position of the slider through the table and extract the value to send to the motor that applies an opposing force. You can check this in action in the “How it Works” part of the video.

We programmed in Max/MSP and Arduino. For controlling the hardware, we used an Arduino-based microcontroller called Music & Motors (check the photo below on the right) developed by CIID.

Now that I’ve seen the video, I can openly admit I regret it. I wish they had a controller of this sort for sale on the market. I’m not sure if Hideaki and Andrew plan to sell this, but they sure would make some money off it. But before they even think about selling it, they may want to figure a way to compact their invention in a smaller unit (doing away with all the wires/clutter).