Google Chrome for mobile has surpassed 1 billion monthly active users on mobile, with 200 million Chrome for iOS and Android users added in the past five months.

The announcement comes as Google released Chrome version 50 – so many versions in just four years. Don’t be fooled by this number, this doesn’t actually mean 50 versions on mobile: all Chrome apps share the same major version number.

When asked for a breakdown of the 1 billion figure across Android and iOS, Google informed VentureBeat that it “isn’t ready to share such figures.” What they did share is an infographic which quantifies what 1 billion monthly users do with their mobile Web browser. 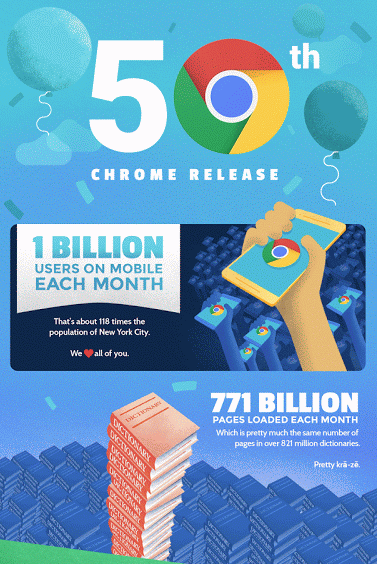 There are some key figures you may want to consider – if you are as “obsessed with stats” as Google is: Users loaded 771 billion pages every month, Chrome’s search autocomplete saved them from typing 500 billion characters per month; Chrome saved 2 million gigabytes of data for users, translated 3.6 billion Web pages automatically each month (thank you, Chrome!), and filled 9.1 billion forms and passwords each month; and Google offered $2.5 million in rewards to strengthen Chrome’s security.

Do you use Chrome on your iDevice?