If you haven’t tried them already, CTV offers two real-time traffic apps which aim to help commuters navigate during peak hours on the road. The CTV Morning Live Traffic app provides a traffic reporting system for Vancouver and its surrounding areas, while the CTV News Cottage Traffic app does the same for Simcoe County, Muskoka, Georgian Bay, Parry Sound and southern Ontario.

Both apps use anonymously collected data from its users to crowdsource real-time travel conditions. The apps have real-time audio alerts and you can save and record your favourite routes within the app. As users report traffic problems it enters the system to be spread to other users. The app doesn’t suggest alternative routes but it relays traffic on your regular routes. 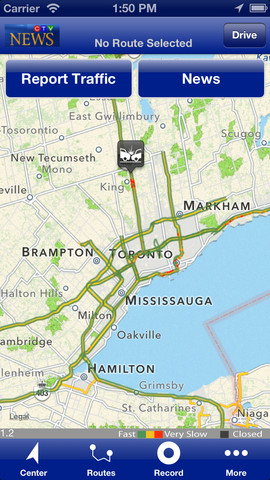 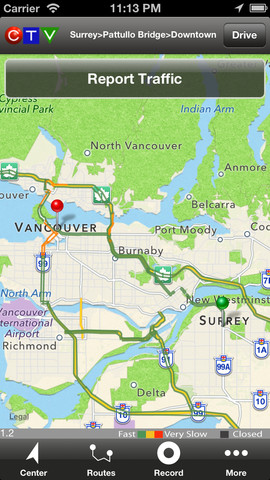 The apps use compression for data so it will consume roughly 5MB for every hour of use and also offers an ‘EcoMode’ where the made hides itself after a short period of time. When users report traffic, the following happens (within the CTV Morning Live app anyways):

What happens when I report traffic?

When you press the “Call to Report Traffic” button, or press SPACE on BlackBerry models, you will be connecting to our Traffic Reporting Centre where you can leave a voicemail about any traffic issues or problems with the app. When you call to report traffic, please be sure to leave the name and direction of the street, the nearest intersection and the reason for delay. Our staff reviews your voicemail and enters the issue into the system to let all other users knows about it. Detailed incident information is a big part of what makes the CTV Morning Live Traffic App so useful, so please call in frequently to report any issues.

Reviews for both apps in iTunes are fairly positive, which indicates the apps do work even though the idea of manually calling in an accident seems pretty old school. Since these apps cover specific areas for commutes it could be a rival to Waze for traffic conditions, although the latter does have more features and users.

Anyone using either of these apps? How are they working out for your commutes?