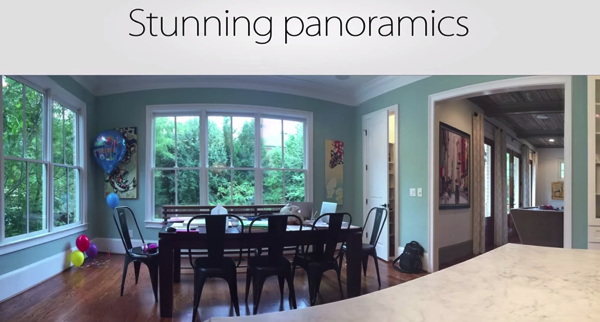 But with the iPhone 6 and 6 Plus, the rounded bottom means the phone cannot stand on its own. Luckily these developers have come up with a smart way to reinvent their app for Apple’s newest iPhones. How? By utilizing the USB power adapter as a stand, as this enables the phone to still rotate on a smooth surface while upright:

HANDSFREE Mode (iPhone 6 ONLY): This revolutionary, fully automated mode lets your phone do all the work.

Just put your iPhone 6 on top of your power adapter on a smooth and level surface (granite, marble or wood desk) and it will automatically rotates 360 degrees using the phone’s internal vibration motor. As it rotates, the phone takes multiple photos, instantaneously stitches them together, and generates a panoramic photo viewable in our immersive viewer.

The iPhone 6/6 Plus update is not available for free for existing users, as it has launched as a new standalone app.