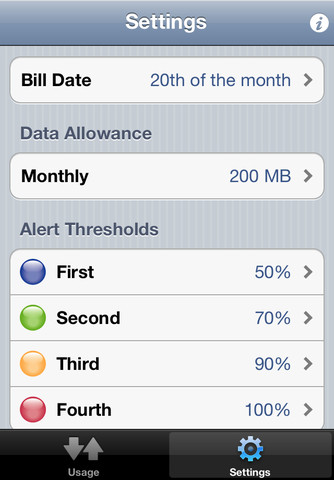 We here at iPhoneinCanada are huge DataMan fans if you don’t already know. We reviewed the application during the fall season of 2010 and very much enjoyed it. It’s an application that allows users to track the data used over the cellular and Wi-Fi network. You can set daily usage limits and even ask to be sent alerts when you near your monthly data allowance.

Overall, if you are on a limited data package such as 200 MB, or below 1 GB for that matter, a tracking application of this sort is excellent. Watching a video over the cellular network can kill a data-package very quickly, and DataMan will help ensure that won’t happen.

If you want to grab DataMan, the developers have dropped the price of the application from $0.99 to free for the next 41 hours. The promotion began at 5:00 PM and will end at 10:00 AM on Thursday. It’s free, so it doesn’t really hurt to try it out. Here are some notable features:

Let us know if you grabbed this free copy of DataMan in the comments below. If you’re a current user of DataMan; how do you like it?